JT (Noah Segan) and Rickie (Shiloh Fernandez) are two loser highschool kids who, during a cut day, stumble upon an abandoned mental hospital. In the basement, they discover what appears to be the corpse of a dead, naked woman. However, upon closer inspection, they see that she’s actually moving and moaning. Rickie immediately wants to go for help, but JT punches him and tells him to leave. It is implied that JT plans to rape the woman. Rickie storms out. Later, Rickie is shooting his gun outside when JT finds him and convinces him to come see something amazing. Back in the basement, JT tells him that during the rape, he broke her neck, and hit her enough times to kill any normal person, but she’s still moving. JT even grabs the gun and shoots her, but she still moves. JT plans on using the “deadgirl” (Jenny Spain) as a sextoy.

When Rickie returns later, he discovers one of his lowlife friends Wheeler (Eric Podnar) raping the deadgirl. Apparently, JT shared their secret. Rickie is pissed, but doesn’t know what to do. Sometime later, Rickie is confronted by two bully/jock types. They proceed to beat up Rickie since he was staring at one of the jock’s girlfriend JoAnn (Candice Accola). Wheeler tries to help but gets his ass kicked, and during this, he screams that they have their own sex slave. This gets the jocks’ attention, and they throw them into their car and drives to the mental hospital. They come into the basement, and JT is there. It’s shown that he’s been staying down there everyday. JT invites them to use the deadgirl, and Rickie goads one of the jocks into sticking his penis into the deadgirl’s mouth, which he does. Soon (you can see this coming from a mile away) the deadgirl bites down and there’s blood everywhere, and the two jocks run off. Rickie feels bad, despite what they did to him prior.

The jock that was bit ends up rotting from the inside out. In one scene, he goes to take a dump and ends up crapping out his intestines (they show everything in detail.probably too much detail). The other jock comes back to free the deadgirl, he thinks that by taking her to the hospital, he can help his other jock friend who is now really sick. However, he gets bit and JT appears to kill him. JT also hypothesizes that a bite can create more zombies. He and Wheeler come up with a plan to kidnap a girl to make into a sex slave zombie. The first girl they pick is a fat biker chick, and when they try to knock her out, she instead kicks their ass (it’s really funny, they hit her with a crowbar and she starts bleeding, but still manages to kick both their asses). However, JoAnn shows up and starts screaming at them to tell her what they did to her boyfriend. They grab her and tie her up. Rickie comes down to kill the deadgirl with a machete and sees what they’ve done.

He tries to talk sense into JT and Wheeler, but Wheeler begins to feel up JoAnn, who is tied to the deadgirl to be bitten. Rickie, in a rage, cuts off Wheeler’s hand with the machete. JoAnn, meanwhile, unties the deadgirl, who proceeds to rip into Wheeler. Rickie and JoAnn try to escape, but is locked in. The deadgirl then proceeds to bite off JT’s face. JT stabs JoAnn with the machete during the scuffle. The deadgirl bolts for the door and knocks Rickie down. It appears that though she could have easily killed Rickie, she chose not to. We see that the deadgirl is now running about outside. As JoAnn lies dying, she tells Rickie to f— off. JT laughs that no matter what Rickie does, he’ll never get the girl, because he’s a loser. The movie cuts out. We see Rickie some time later, happy. After school, he shows up at the hospital, goes downstairs, and you see that he has JoAnn dressed up and tied up, and the new zombified JoAnn opens her eyes.

Note: There are some parts that I don’t understand here. I also watched this on Netflix on the computer, so didn’t have the CC option, so it was hard to hear what everyone said at the end, as the sound wasn’t that great. But primarily, JoAnn never got bitten, so I’m not sure how she’s zombified. It’s also unknown what happens to the jock who crapped his guts out, or what happened to JT. I’m sure someone with the DVD special edition could answer these questions. 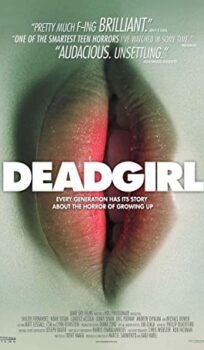