High schooler Evan Hansen (Ben Platt) suffers from anxiety and depression, having no friends at school and being unable to talk to his crush, Zoe Murphy (Kaitlyn Dever). As part of an exercise per his therapist’s recommendation, he writes a letter to himself, but after he prints it out, it’s found by Zoe’s brother Connor, who has a reputation for being difficult and aggressive. Connor thinks Evan wrote the note so that Connor would find it and provoke him to freak out. Connor later commits suicide, and his parents Cynthia and Larry find the note in Connor’s pocket, thinking that he wrote it for Evan and believing that Evan was Connor’s only friend. Although Evan wants to admit the truth, he cannot bring himself to break their hearts, and he goes along with the lie.

The lie goes deeper when Evan participates in The Connor Project at school to honor Connor, with everyone believing that the two were best friends. Evan spends more time with Connor’s family, even developing a relationship with Zoe, but also putting a strain between himself and his mother Heidi (Julianne Moore). After he shows the note to classmate Alana Beck, who organized The Connor Project, she posts it online to try and get crowdfunding for renaming Connor’s favorite orchard in his memory. This only causes people to view Connor’s family as bad people who mistreated him and drove him to commit suicide. This also forces Evan to come clean about the lie, devastating Connor’s family.

After talking to Heidi, Evan confesses the truth to her, even admitting that he broke his arm because he also attempted suicide. He later reveals the truth to social media and becomes an outcast once again, but he makes an active effort to keep Connor’s memory alive by getting in touch with people who went to a rehab clinic with Connor. He finds a video of Connor playing a song he wrote, and he sends it to Connor’s family.

Evan later reconciles with Zoe and vows to keep going in life by getting better and better. 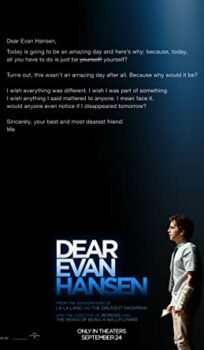