Savannah Curtis (Amanda Seyfried) is on spring break at her parent’s place near the ocean.  John Tyree (Channing Tatum) is on leave visiting his father in the same town.  He gallantly rescues Savannah’s purse and they start a friendship.  Sparks fly.

After two weeks together Savannah and John go their separate ways.  She returns to college and he finishes his army duty.  They promise to write to each other about everything.  Then 9/11 happens.

John and Savannah get on day and night together.  John meets Savannah’s family.  John decides to stay with his group and extend his duty.  Savannah doesn’t like it.  This could be the last time they see each other so they have sex.

Savannah stops writing.  John gets his ‘Dear John’ letter stating Savannah couldn’t live without him and has gotten engaged but doesn’t tell him to who.  John burns all of the letters.  He gets shot twice in the left shoulder but wants to extend his duty and possibly make the army his career.

John’s father has a stroke so he is given leave.  They reconcile.  John’s father dies.  No one comes to the funeral.  John goes to Savannah’s house.  They talk and he finds out she married Tim.  Turns out Tim contracted cancer (lymphatic) and needed her to take care of him and his autistic child now a teenager, Alan (Luke Benward).  John goes to visit Tim with Savannah at the cancer hospital.  Tim tells John that Savannah still loves him and never looked at him like she looked at John.

John and Savannah have an exchange about the circumstances around not writing or calling.  Savannah and John reconcile.  There is a moment of possibilities but they restrain themselves.  John leaves.

While John is going through his father’s things.  He sells the prized coin collection except the special ‘mule’ coin which started the collection.  He anonymously donates the money to Savannah so that she can get Tim special medicine to bring him home with his family.

Savannah writes a letter to John explaining that the money was well received.  It gave Tim two months with his family before he died.

In the end, we see John with a trimmed goatee on bike.  Savannah is waiting by the window in a cafe.  They see each other and embrace. 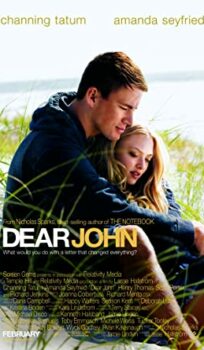