Due to her political activities, Paulina Escobar (Sigourney Weaver) was taken captive and held for 2 months by a fascist regime where she was tortured and raped repeatedly while blindfolded.  Years later and now married to a prominent attorney, Gerardo Escobar (Stuart Wilson), in an unnamed third world country, she believes, based on his voice, mannerisms and smell, that that she has found the man who raped her “14 times” while in captivity.  She abducts the man, Dr. Miranda (Ben Kingsley) and places him on “trial” for his life.  Gerardo, who has just been appointed Attorney General and has been tasked with investigating the “war crimes” of the ousted regime, finds himself in an impossible dilemma.

During the “trial”, Dr. Miranda puts up a good defense but in the end he fully admits to the torture and rape of Paulina and goes further by indicating that he enjoyed the power he had over her and was sorry it ended.  This admission frees her, to some extant, and rather than shooting him, releases him to live with his guilt.  It is left to the viewer to decide if Gerardo goes after Dr. Miranda in the hearings or not. 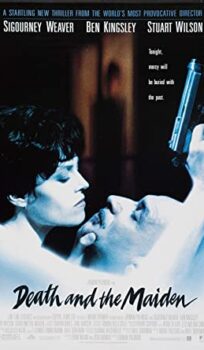