Short Version:
The movie takes place over the course of a single day, during which a family is burying its patriarch. Much wackiness ensues, but nothing really bad happens. (And, the title notwithstanding, no one dies.)

Long Version:
Daniel (Matthew Macfayden) delivers a beautiful, heartfelt eulogy and pays the down payment on the flat.

Robert (Rupert Graves) agrees to take his mother, Sandra (Jane Asher), back with him to New York City.

Martha (Daisy Donovan) is pregnant. She and Simon (Alan Tudyk) are going to get married. When her father tries to intervene, she tells him off.

Justin (Ewen Bremner) loses all interest in Martha when he finds out she’s pregnant.

Troy (Kris Marshall), despite having manufactured the hallucinogens that are accidentally given to Simon, Peter, and Uncle Alfie, never gets into any trouble with the police or, worse, his father.

A drugged-out Uncle Alfie (Peter Vaughn) ends up naked on the roof, muttering at the moon.

Peter (Peter Dinklage) isn’t dead: He bursts out of his lover’s coffin in the middle of Daniel’s eulogy. And he never gets his money.

Sandra finds the photographs of her husband and Peter having sex: So *that’s* why her husband hadn’t made love to her in so long! 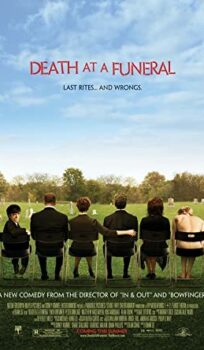