Ernest (Bruce Willis) doesn’t drink the potion, because he refuses to the idea of living forever and having to be around Madeleine (Meryl Streep) and Helen (Goldie Hawn) for eternity.  He manages to escape from the party at Lisle’s (Isabella Rossellini’s) manor, driving off in a car, property of… James Dean?!

Madeleine and Helen start showing immediate signs of deterioration, and agree to be there for each other, to take care of and fix each other.  Then, the plot forwards to 37 years in the future, and we see the two women attending Ernest’s funeral.  We find out that he managed to get married, had many children, and started a true labor of love and prosperity.  Madeline and Helen scoff and leave.

When they are about to descend the stairway of the church, Helen trips on a neglected can of spray paint which they used for instant touch-ups.  Madeleine thinks of pushing her off, but Helen pulls her and they both fall off the long stairway, landing violently against the ground below and bursting into two wreckages of several pieces.

Their dilapidated pieces remain staggering, and their heads manage to crawl next to each other, while Helen asks: “Do you remember where you parked the car?”, and the movie ends. 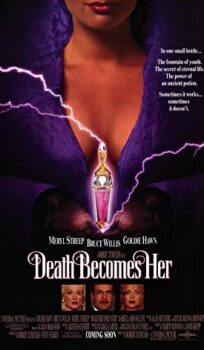