On the eve of two schools meeting for an exam competition, a group of 20 elite students and a few teachers are taken hostage by a sadistic killer who makes them solve questions. If they fail, a kidnapped student of the group will die in a horrific fashion. Over time, the group discovers that the questions are linked to Kim Ji-won (Ham Eun-jeong), a former top ranked student that was murdered on the school grounds the year before. Five students die in the tests, plus a teacher who tries to leave the school grounds. In addition Kang (Kim Bum) is killed by Jo-Beom, a former student driven insane. Jo-Boem is killed by Mr. Chang-wook (Lee Beom-soo) in self defense to prevent him from killing Ina (Nam Gyu-Ri).

During a funeral service in the school gymnasium Ina is kidnapped by the killer who broadcasts the final test. The killer is revealed to be the security guard who was with the group the entire time. He is Kim Ji-won’s father and wants to know who murdered his daughter. Kim Ji-Won’s murderer is revealed to be Chang-wook. Kim Ji-won had discovered that he was paid off by the parents of the five murdered students to get the exam tests early, knocking her out her top academic spot. Needing her top grades to help her father with his failing business, Kim Ji-won blackmailed Chang-wook to make things right. When he refused to help and she threatened to expose him, he strangled her to death. Jo-Boem had witnessed the murder and it had driven him insane with guilt over the past year for not reporting the crime, causing him to see the ghost of Ji-won. Meanwhile, Ji-won’s father got a job as a guard at the school in order to put his plan of revenge into motion.

Ina is saved by another teacher as Ji-won’s father confronts Mr. Chang-wook in the gym and stabs him to death with an axe, getting his revenge. The last scene is Ina looking at the school’s academic listings. With her competition dead, she is now number one. As she looks into the camera, her image changes over to the spirit of Kim Ji-won. 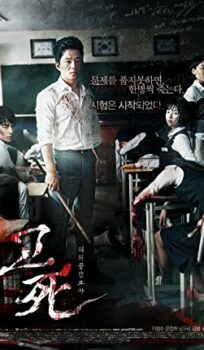