Short version:
Jensen (“Frankenstein”) and Machine Gun Joe escape the race and the prison using a hole in the track. They move to Mexico and become auto mechanics. Jensen gets his daughter back.

Long version:
Every racer except Jensen Ames (“Frankenstein”) and “Machine Gun Joe” die in the first and second race, leaving just Jensen and Joe to race it out. Before the race, Hennessey sets up Jensens car to explode remotely. While Jensen’s crew is working on his car before the third race, they review the tapes from previous races and discover that there is a way to open a hole in the track to escape.

The race begins and Hennessey begins sabotaging the track by preventing Jensen from getting weapons, but allowing Jack to acquire all of his. During the race, the exact same scene that the movie began with played out, with Frankenstein dropping the tombstone – but this time Jack dodges it. Then, it’s revealed that they’ve both been acting this whole time, as Jack starts firing all his rockets at the weak point in the wall, blowing a hole in it that allows them to both start escaping. After a brief car chase, Jack’s navigator gets killed by police shooting, and Jensen bails from his car, leaving Case (his navigator) behind to drive, dressed as Frankenstein. Since Hennessey already gave Case her prison release papers, the police can’t do anything, as she’s a free woman when the race ends. Somehow, Jack escapes the police and they don’t notice Jensen jump. They both change their clothing, jump onto a train and ride away.

Coach, one of Jensen’s teammates, discovers the bomb rigged to Jensen’s car before the race starts and removes it. He later mails it to Hennessey disguised as a present, which explodes, killing her and her body guard.

Six months later, Jack and Jensen are living in Mexico, now friends, employed as auto mechanics. Case drives up and greets them, showing she’s alive. Jensen gets his daughter back and they all live happily ever after. 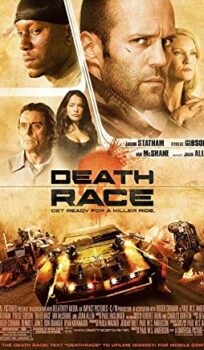