Detective Frank Ochoa (Vincent Gardenia) figures out that Paul Kersey (Charles Bronson) is the vigilante killer.However, the D.A.’s office doesn’t want to arrest or prosecute Kersey, because he’s been lowering the crime rate drastically. Ochoa tries to scare Kersey into giving up his activities, but is unsuccessful.

Kersey is seriously wounded while pursuing a mugger through the Upper West Side of Manhattan. The police officer who finds Kersey takes Kersey’s gun and gives it to Ochoa. Ochoa visits Kersey at the hospital and makes him an offer: if Kersey will leave New York City forever, Ochoa will dispose of the gun and tell the press that the vigilante is still at large.

Kersey gets on a train and moves to Chicago. As he arrives at the railroad station, he sees a gang of thugs hassling a young woman. Kersey helps the young woman, then playfully points an imaginary gun at the punks. Clearly, Kersey intends to resume his crimefighting activities in the WIndy City. 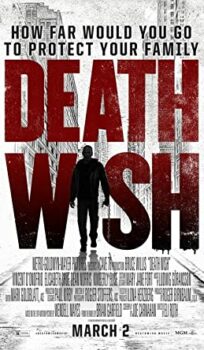