The police in New York recognize Kersey’s work and send detective Frank Ochoa (Vincent Gardenia) to Los Angeles to persuade Kersey to stop. Ochoa meets with Kersey’s fiancee Geri (Jill Ireland) and tells her what Kersey has been up to. She confronts Kersey, but he denies all and she believes him.

Ochoa follows Kersey, and sees that Kersey is stalking several gang members. When the gang is about to kill Kersey, Ochoa comes to Kersey’s aid, and is mortally wounded himself. As Ochoa lies dying, he urges Kersey to kill the rest of the gang.

The last surviving member of the gang that killed Kersey’s daughter is “Nirvana” (Thomas F. Duffy). The police arrest Nirvana before Kersey can get to him, but Nirvana is not executed or even sent to prison. He’s sent to a comfortable psychiatric hostpital.

Kersey dresses as a doctor and sneaks into the psychiatric hospital. He electrocutes Nirvana using a machine built for shock treatments. An orderly catches Kersey in the act, but decides to let Kersey get away, because he knows how evil Nirvana was.

So, Kersey kills the entire gang and gets away scot-free… but he doesn’t go completely unpunished. Geri figures out that Kersey really is a vigilante killer, and ends their engagement.

In the final scene, Kersey’s boss asks if Paul is free for dinner that night. Kersey accepts the invitation, smirking, “What else would I be doing?” 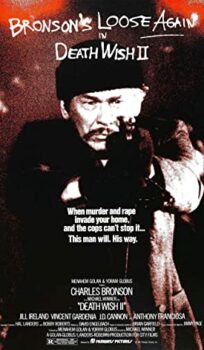