It is revealed that the owner of the Argonautica cruise ship, Simon Canton (Anthony Heald), had made a deal with the mercenaries led by Hanover (Wes Studi) to show up to the cruise ship, rob it and its wealthy passengers, then get the passengers off the ship and sink it with the torpedoes they brought on board Finnegan’s (Treat Williams) boat, which would then allow Canton to collect the insurance on it. Canton knew about the sea monster in the ship, but apparently did not expect it to attack the ship. Canton would later try to kill the survivors he revealed his plan to so there’d be no one to tell the authorities.

When Finnegan accidentally loses the parts needed to get his boat back into working order (a hole was punched into the hull of the bow when the boat ran over one of the Argonautica’s dislodged lifeboats), he decides to set a course for the boat to do a U-turn on auto-pilot and, with the torpedoes still on the ship, have it ram into the side of the ship to blow it up and kill the monster. He and Trillian (Famke Janssen), using a jet ski, manage to escape the monster’s tendrils and the ship just as Finnegan’s boat collides with it and blows it, and the monster, to smithereens. Canton, who tried escaping on Finnegan’s boat not knowing until it was too late that it was on auto-pilot, dies as well.

Finnegan and Trillian make it to a nearby island, and the other sole survivor Joey (Kevin J. O’Conner) originally thought to have been killed by the monster makes it there, too. Then, all three hear a tremendous roar coming from the island’s jungle, and Finnegan says “Now what” before the end credits roll. 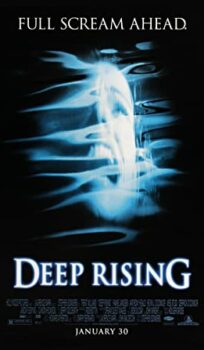