POOPER:
On April 20, 2010, a blowout occurs on the offshore oil rig Deepwater Horizon, leading to an explosion and fire.  11 crewmembers are killed, but Mike, Jimmy, Andrea, Caleb, Donald, and Robert are all rescued.  Donald and Robert are indicted on manslaughter charges for their actions leading to the blowout, but the charges were eventually dropped.  The blowout lasts for 87 days, spilling approximately 210 million gallons of oil into the Gulf of Mexico.  It was the worst oil disaster in US history.  Before the blowout, Mike was able to get a dinosaur tooth for his daughter and gives it to her after he is rescued and returns home.

LONG VERSION:
The offshore oil rig Deepwater Horizon, run by Transocean on behalf of BP, is operating in the Gulf of Mexico near the southern coast of Louisiana.  On April 20, 2010, several crewmembers are preparing to fly to the rig to work on it.  Among them are Chief Electronics Technician Mike Williams (Mark Wahlberg), Offshore Installation Manager Jimmy Harrell (Kurt Russell), and Dynamic Position Operator Andrea Fleytas (Gina Rodriguez).  Prior to leaving for the rig, Mike’s daughter Sydney tells him the presentation she plans to give to her class about what he does (“he tames the dinosaurs”), and asks for a fossil to show the class as proof.  Upon arriving at the rig, Jimmy learns from the departing crew that the cement quality check test that they were supposed to do didn’t get done.  An upset Jimmy meets with the BP managers on site, Donald Vidrine (John Malkovich) and Robert Kaluza (Brad Leland), and demands that a pressure test be done on the line to check the quality of the cement seal that connects the pipe to the ocean floor.  This is the test that the previous crew should have done.  They resist at first, citing the cost, but Donald eventually allows for the test to happen.  While that is happening, one of Mike’s coworkers gives him a dinosaur tooth that got pulled up by the pipe.  He then calls his wife Felicia (Kate Hudson) on Skype and tells her he has Sydney’s fossil.

The test is a success, but nobody knows the cement seal is about to fail.  Once Robert orders the pipe flow to resume, the seal fails and the result is a blowout.  While the crew recovers from the blowout, methane gas begins to come up the pipe, increasing the pressure in the pipe until it fails, leading to a powerful explosion and fire on the rig.  The explosion knocks Mike backwards, and he promptly ends the Skype call to help his coworkers.  Mike finds a seriously injured Jimmy, and he tells MIke to take him to the bridge so he can assess the situation.  While the crew desperately tries, but fails, to stop the blowout, Jimmy realizes the rig cannot be saved, and orders an evacuation of the Deepwater Horizon.  Mike and another crewmember, Caleb (Dylan O’Brien), start taking Jimmy and the rest of the injured crew to the emergency lifeboats.  Donald and Robert, as well as the rest of the BP employees, have already boarded the lifeboats, passing by the Transocean employees.

As night falls, the Coast Guard is getting emergency calls about an oil rig fire and they send ships and helicopters to assist in the rescue, but it will take a while to reach the rig.  News of the fire has reached the mainland, with Felicia and other family members of the crew watching the news and calling each other to learn about their loved ones.  Mike has now rescued Andrea and is taking her to the lifeboats, but they have already left the rig, leaving them behind.  The Deepwater Horizon’s support ship is pulling the lifeboats on board, as well as crewmembers who jumped off the rig, and they see Mike and Andrea climbing up the rig.  Because the water near the rig is also on fire, Mike and Andrea have to climb to the top of the rig so they can jump over the fire into the water.  Once they reach the top, Andrea has a panic attack about jumping from a great height.  Mike is able to calm her down, then they jump off, where the just now arriving Coast Guard is able to rescue them.  The next day, after they received medical attention, the surviving crewmembers meet at a local hotel, and they are surrounded by media and family members.  Mike is reunited with Felicia and Sydney, and he gives his daughter the dinosaur tooth.

The movie ends with video of the real Mike Williams, Jimmy Harrell, and Andrea Freytas giving their testimony to Congress concerning the events on the Deepwater Horizon, followed by title cards revealing their fates.  Mike and his family live in Texas and he never returned to the sea.  Andrea lives in California and no longer works in the oil industry.  Jimmy still works for Transocean.  Donald and Robert were indicted on manslaughter charges for their actions, but the charges were eventually dropped.  The blowout lasted for 87 days, and approximately 210 million gallons of oil spilled into the Gulf of Mexico.  It was the worst oil disaster in US history.  Before the credits, the pictures and names of the 11 crewmembers who were killed are shown. 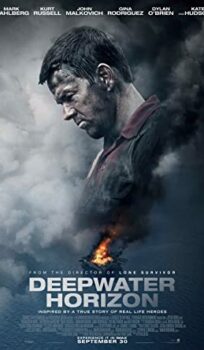