SHORT VERSION:
Delgo and Princess Kyla eventually decide that the only way to beat Sedessa and her army of monsters is to try to find a way to get their races to cooperate, knowing that she is counting on their hatred of one another and won’t expect that. Delgo decides to go to the Nohrin palace to face Sedessa and save King Zahn, Kyla tells the Nohrin troops about Sedessa’s scheme and how they must fight alongside the Lockni to vanquish her army, and Delgo has Filo stir up a stampede of ground beasts and bring them to the battlefield. The Nohrin get the Lockni to safety while the stampede sends Sedessa’s army running.

Delgo gets to the palace and finds himself fighting Sedessa’s top warrior Valtac, but he loses. He then uses the light from his hammer’s uberstone to disorient Valtac, causing him to start swinging his club around until he destroys a support column, and the roof begins to break apart and bust open holes in the floor. In the end, Delgo saves Zahn just as Kyla shows up to check on them, and Valtac and Sedessa fall through the holes to their deaths on the ground far below.

Delgo, Kyla, and Zahn go to the battlefield to see their races cheering the defeat of Sedessa’s army, and Zahn shakes hands with Elder Marley to establish peace between their races. Raius – having earlier lost a fight to Bogardus – then appears and throws a spear at Delgo, but Filo finally masters his slingshot and uses it to break the spear before it can hit Delgo, and Raius is taken down by a Nohrin soldier. Delgo and Kyla then share their first kiss to end the movie.

LONG VERSION:
Delgo, Filo, and Bogardus manage to track down Princess Kyla to Sedessa’s castle, and in the meeting hall, they see Sedessa riling up her army of monsters for her impending invasion of Jhamora, and she has Kyla tied up in preparation for having her wings cut off. An enemy warrior then surprise attacks Bogardus, so as he deals with him, he tells Delgo to free Kyla. Delgo tries to have Filo provide a distraction so he can get to Kyla unnoticed, but Filo bungles it up and Delgo gets spotted. While avoiding attacks from the soldiers, he gets to Kyla and sets her free, and they take off out of the hall.

As they escape, Sedessa dispatches her army to Jhamora, where the Nohrin and Lockni are moments away from going to war with each other thanks to the machinations of her and her Nohrin mole/lover General Raius. Her plan is to have her army aid the Nohrin in killing all of the Lockni so she will win her people’s favor, but she also plans to have her brother King Zahn secretly captured and killed so that way she can take over the throne and rule over all of Jhamora, not just the Nohrin. While fighting more warriors, Bogardus tells Delgo to get Kyla to safety, but once they get outside, Delgo sends her ahead to the Nohrin’s homeland to warn her father about Sedessa’s invasion. He effects an escape via one of the many flying carriers transporting Sedessa’s army, and Bogardus collects Filo and escapes with him on a razorwing. Back on Jhamora, the Nohrin and Lockni start their war.

Kyla makes it to the Nohrin palace and finds her father’s advisor Gelmore, who tells her that the war has begun and her father is on the battlefield. She gives him the news of Sedessa’s invasion, and he tries to convince her to stay while he has a messenger relay this news to Zahn. However, he inadvertently reveals that he is in league with Raius, so she knocks him out and heads for the Nohrin encampment on a razorwing, and along the way, she finds Delgo still on the carrier and helps him escape from it. Sedessa takes control of the palace after Kyla’s departure, and her army charges onto the battlefield and starts battering the Lockni while Raius convinces his fellow commanders to let them assist the Nohrin. Meanwhile, a separate group of Sedessa’s warriors sneak into the Nohrin camp, knock out the soldiers standing guard and capture Zahn, during which Raius shows up and reveals his true colors to him. After Raius orders the soldiers to take Zahn to the palace, Bogardus appears with Filo, so he and Bogardus do battle. Bogardus tells Filo to save Zahn, but he faints upon seeing how big and ugly the soldiers are, and the soldiers deliver Zahn to Sedessa.

Bogardus defeats and apparently kills Raius, and Delgo and Kyla arrive at the encampment and learn of Zahn’s capture from Filo. Just then, an enemy archer shoots an arrow at Delgo, but Bogardus sees this and takes the arrow instead. As he dies, he says to Delgo “You’re on your own, kid”, and Delgo realizes – based on this phrase – that Bogardus was the Nohrin soldier who spared his life during the first war years ago. Delgo is ready to give up at this point, but Kyla reminds him that Sedessa is counting on their races’ hatred of one another, so they must do the unthinkable and find a way to get their races to cooperate if they are to beat her. Delgo formulates a plan where he will head for the Nohrin palace alone to confront Sedessa and rescue Zahn, Kyla will get a message out to the Nohrin troops about Sedessa’s whole plot and the need to fight alongside the Lockni to vanquish her army, and Filo will ride atop Kyla’s razorwing and have it stir up a huge herd of ground beasts to create a stampede heading for the battlefield, intending to drive off the enemies with it.

Kyla gives her message to the troops, and they start helping out the Lockni against Sedessa’s army and then get them to safety just as Filo arrives with the stampede and sends the army into full retreat. Delgo breaks his way into the throne room and finds himself fighting Sedessa’s top warrior Valtac, and though he fights valiantly, he is defeated and the uberstone on his hammer is broken. As Valtac prepares to kill Zahn, Delgo telekinetically sends the fragments of the stone over to him, where they rejoin and fly brightly all around him and disorient him. He starts to blindly swat away at the stone with his club, resulting in him accidentally breaking one of the room’s support columns. The roof starts falling apart, and a big chunk of rock comes down and breaks open a hole in the floor underneath Sedessa and Valtac to the ground far below, and Valtac falls to his doom but Sedessa hangs onto the edge. Faced with the choice of either saving her or letting her fall, Delgo remembers Elder Marley’s words about learning from the past and decides to not succumb to his desire for vengeance, so he throws down a chain to her to climb back up with. He starts tending to Zahn just as Kyla appears, but Sedessa then dazes him with a sneak attack. Kyla then struggles with her, during which another chunk of falling rock breaks open the floor under her again, but this time she plummets to her death.

Delgo, Kyla, and Zahn head for the battlefield and see both armies cheering their victory over Sedessa’s forces, and then Zahn shakes hands with Marley to establish peace between the races. Suddenly, the still-living Raius shows up near Delgo, and he throws a spear at him just as he gets taken down by a Nohrin soldier. Fortunately, Filo finally gets a handle on his slingshot and uses it to break the spear before it can hit Delgo. The movie ends with Delgo and Kyla sharing their first kiss whilst being encircled by uberstones. 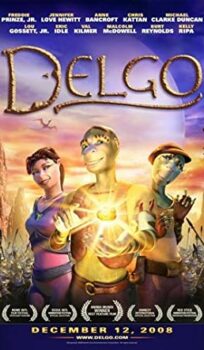