Sgt. Kilgore (Keith David) finally catches up to Larry (Larry the Cable Guy), Bill (Bill Engvall), and Everett (DJ Qualls) in La Miranda as they are in the middle of a standoff with Santana (Danny Trejo) and his gang of bandits, and Everett soon produces a rocket launcher in an attempt to scare the villains away. Unwilling to let him use such a powerful weapon, Larry fights him for control of it, and Everett winds up shooting the rocket straight up into the air. It comes back down in their direction, and everyone scatters to avoid it as it lands in the town’s non-functional well and explodes. Though the blast causes water to gush out of the well for the first time in years, the chaos that preceded it enables the bandits to kidnap Kilgore and take him to their headquarters. Once Larry, Bill, and Everett discover this, they head over there to free him.

The trio sneaks onto the property, and after seeing that the bandits are entertaining themselves with a lucha libre show, Everett dons a luchador outfit and has a match with another luchador in order to keep them distracted while Larry and Bill save Kilgore. Larry finds Kilgore first and unties him, and when Kilgore finds Bill attempting to sabotage the bandits’ vehicles by putting sugar in their gas tanks, he substitutes the sugar with dynamite that he just found. Everett ruins the plan when he excitedly unmasks in full view of the bandits after winning the match, after which Santana orders his men to shoot him, but Larry appears and fires off a few rounds in order to make the villains hit the dirt and enable Everett to get over to his side. All of the bandits’ vehicles then explode, and Larry and Everett run outside and meet Bill and Kilgore in the open-air Hummer they came in before they all drive back to La Miranda. Santana orders his men to saddle the horses and bring out “Big Bertha”, declaring that this is the end of La Miranda.

The soldiers make it back to town in the morning, and Kilgore informs Larry and the others that they must head back to the U.S. because this isn’t their fight, which Bill backs him up on. Larry refuses to leave, pointing out that Santana’s gang will undoubtedly be coming here and the town is defenseless. He also adds that, as American soldiers, their job is to bring freedom and democracy to people that need it, and the citizens of La Miranda definitely need it. He persuades the others to stay and fight with him, and just then, Santana’s gang appears in the distance on horseback and is backed up by “Big Bertha”, which is a World War II Sherman tank. Larry orders his love interest Maria (Marisol Nichols) to get all of the citizens to the church.

The four soldiers engage their enemies, and Kilgore informs the others that they must take out the tank. To that end, Larry brings out the old cannon Everett had been trying to make operational again, and he manages to get it to blast the tank and wreck it. Just then, La Miranda’s citizens – having reached their limit with Santana and his bandits – back up the quartet with weapons of their own and send the villains running for the hills. However, Santana is shown heading for the church, and he soon seizes Maria and takes her away. Larry finds out about this from her father moments later when he goes to check on the people there, and he intercepts Santana before he can escape. Larry gets Maria over to him, but just before Santana can shoot them both, another American soldier appears in a helicopter and shoots Santana’s gun out of his hand. More U.S. Army helicopters then appear and distract Santana, giving Larry the chance to punch him out, and he then kisses Maria as a few dozen troops enter the town.

The soldiers round up all of the bandits, and then Col. Dalton (Matt Riedy) stands before Larry, Bill, Everett, and Kilgore. He explains that the soldiers are here thanks to Bill’s wife Connie (Lisa Lampanelli); when Bill called her the day before and said he was in Mexico, she called the Pentagon relentlessly and told anyone who would listen that her husband was stranded there until the Joint Chiefs sent the Army down to get them. The quartet is then approached by the undersecretary for the Central American Affairs section of the State Department, who wishes to talk to them about covering up their presence in a friendly nation. With their cooperation, the U.S. government spins a story to the media saying that the four men were part of a successful campaign called “Operation: Sombrero”; with the (retroactive) permission of the Mexican government, the operation was designed to have U.S. personnel strike at terror camps in northern Mexico, causing Santana and his bandits to be labeled a terrorist group.

Larry, Bill, Everett, and Kilgore return to the U.S. and are all awarded the Silver Star, and Bill also receives a Purple Heart for getting wounded in the buttocks during the battle. Their fates afterward are as follows:

Kilgore now runs the highly successful Boot Camp Workouts in Miami, Florida, fulfilling his secret dream of being an aerobics instructor.
Bill sued the Mexican government for his injuries. He received a hefty out-of-court settlement, which he used to buy a mansion for him and his family in Beverly Hills.
Everett returned to Mexico and became Carne Asada (Grilled Beef), the nation’s most popular professional wrestler.
Larry also returned to Mexico to be with Maria. They later got married and opened a cantina called “The Mess Hall” on a beach in Cabo San Lucas, fulfilling a dream Maria had to open a cantina on a beautiful beach far from La Miranda. 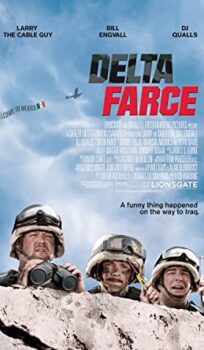