John Spartan (Sylvester Stallone) learns from Simon Phoenix (Wesley Snipes) that the hostages Simon had back in 1996 were already dead before the building they were contained in blew up, meaning that John was a wrongfully convicted man. The ruler of San Angeles, Raymond Cocteau (Nigel Hawthorne), was behind Simon Phoenix’s (Wesley Snipes) escape from the cryo-prison and was the one who gave him the skills needed to turn him into a terrorist. Raymond did this to: 1) Have Simon kill the leader of the “scraps”, Edgar Friendly (Denis Leary), and 2) Allow himself to exert even stronger control over his citizens. However, although he put a command in Simon’s brain to not kill him, he forgot to put such a command into the brains of Simon’s henchman, and so Simon has one of them (Jesse Ventura) kill Raymond. Simon then goes to the cryo-prison to thaw out 80 more criminals for his syndicate. John learns of Simon’s plans and goes to the cryo-prison, and while fighting Simon he smashes a rod with a cryo-blob in it on the floor, and the cryo-blob begins to freeze everything. Simon gets caught in its path and is frozen solid, while John avoids it and decapitates Simon. The cryo-blob’s freezing of everything causes all the machines to malfunction, and John manages to get out before the whole place explodes. Raymond’s death has now paved the way for Edgar and the rest of the “scraps” to shape a much more humane and freer society, and John shares a passionate kiss with Lenina Huxley (Sandra Bullock). 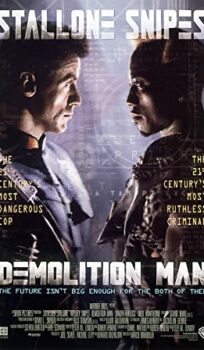