SHORT VERSION:
With Rodney and Mike’s help, the secretaries conquer their various personal problems and even win the Secretary League softball title, and in the end, the guys and the head secretary Jane stick it to Kenny by closing a deal between Treadline Tires and the national auto parts chain Reilly Auto Parts that Kenny had earlier botched. Kenny gets demoted from his position as head of the sales division and both Rodney and Mike get promoted to it as a reward. Rather than fire Kenny, Rodney and Mike decide to put him in charge of “advertising”, which sees him wearing an embarrassing tire costume and dancing for traffic outside the building.

Jane is awarded with a job as a sales associate, which she always wanted to do, and she becomes one of the best ones there. The secretaries get a new and improved break room (Kenny earlier had the old one demolished out of spite), and Kenny’s toady Kline becomes their coffee delivery guy. Mike ends his womanizing ways and goes steady with Elizabeth, an auditor he had been assigned to, and Rodney marries his fiancé Jennifer and finally wins her overbearing father’s approval with his new job.

LONG VERSION:
Rodney (Michael Vartan) and Mike (Sean Astin) help their fellow secretaries with their various personal problems and earn their respect, plus they help them win the Secretary League softball championship. Also, Mike – who has long been a womanizer – finds himself nurturing a mutual romantic connection with Elizabeth (Constance Zimmer), an auditor he was assigned to. However, Rodney struggles to keep his new occupation secret from his fiancé Jennifer (Sara Foster), mainly to not get verbally reamed by her overbearing father J.R. (Patrick St. Esprit) All the while, Kenny (David Cross) continues to be excessively cruel to the guys and the secretaries.

One day, Kenny holds a meeting with all of the sales associates and announces that Treadline Tires, through him, will soon be closing a deal that the late Farrell (Robert Klein) started with Reilly Auto Parts, a national auto parts chain, which will make their company one of the top tire brands in the country. He soon sends Rodney out to get coffee for him and the rest of the sales reps, but all Rodney does is beat up the server when he insults him. After he returns and he tells Mike about the incident, they spot Treadline’s corporate officers leaving the boardroom and Kenny throwing a huge tantrum in there, and Jane (Celia Weston) tells the duo that the deal with Reilly Auto Parts fell through at the last second and landed Kenny in serious trouble with the bigwigs.

When the guys arrive at work the next day, they discover Kenny and a construction crew demolishing the secretaries’ break room, which was done as another budget cutting measure (and another act of spite; Kenny had earlier taken the secretaries’ parking spaces away for the same reasons). The following day, Kenny, Mike, and the other secretaries stage a strike outside the building and refuse to return to work until they are unionized, and this receives coverage on the local news and also gets the support of Elizabeth. Kenny caves in to the pressure and meets with Mike and Rodney, and ultimately, he agrees to a union. Unfortunately for Rodney, as he and Mike celebrate their victory with the secretaries that night at Bennigan’s, Jennifer and J.R. show up sporting displeased faces. Rodney and Jennifer talk in one of the bathrooms, during which Jennifer says that she found out about what his true work situation was thanks to J.R. seeing the strike on TV and informing her about it. Rodney tries to explain his deception, but she is too upset to listen, and she puts her engagement ring on the counter and leaves.

The next morning, the defeated Rodney talks to Kenny and begs him for his old job back, as well as Mike’s. Kenny replies that there is no chance of that ever happening, and goes on to inform him that, because of the secretaries’ union stunt, he has to get back into corporate’s good graces, and the best way to do that is to agree to lay off some of the sales division. Therefore, Rodney, Mike, and all of the other secretaries will be the first to go in two weeks time. After Rodney meets with Jane and tells her of Kenny’s plans, she – having seen them talking – shows him that she has all of the files pertaining to the Reilly Auto account and encourages him to do the deal with Mike and herself, wanting in on this out of both her desire to be a sales associate and so her friends can stay employed.

Later on, Kenny’s yes-man Kline (Jay Johnston) bursts into Kenny’s office and tells him that he got off the phone with a guy at Reilly Auto Parts and learned that Rodney, Mike, and Jane just went into a private meeting with Robert Reilly (Billy West). Furious, Kenny has Kline drive him down to Reilly Auto’s headquarters to stop the trio, but after he barges into the meeting room, he finds out that the trio have just closed the deal with the company. Kenny tells Rodney and Mike that he is now going to kick both of their butts for this, but Mike knocks him out with the first punch thrown. Off-screen, Treadline’s higher-ups reward Rodney and Mike with their old jobs and a strong possibility for promotion.

After Elizabeth completes her auditing duties a few days later, she and Mike officially start dating. Rodney goes to Jennifer’s house and gives her the news about his success and says he did it for them, but she replies that his job was never the issue; she just hated how he lied to her. He apologizes again for deceiving her, but she repeatedly tells him that it’s fine. He isn’t convinced, and decides to fulfill a promise he made to her by stripping naked then and there and telling everyone who can hear him that he loves her. Moments later, the secretaries show up behind Jennifer, and she explains that they came here fifteen minutes before he did and told her all about how he helped them and how he is a changed man, and they give each other their love and kiss. Rodney and Jennifer get married some days later, with Mike, Elizabeth, and the secretaries in attendance. At the reception, Rodney tells J.R. that he has received a real promotion this time, and J.R. hugs him and expresses pride in him for a change.

It turns out that the promotion Rodney and Mike were awarded with was the co-leadership of the sales division. Jane is now a sales associate (and performing spectacularly), and the secretaries get a new and improved break room with Kline as their coffee delivery guy. In a phone conversation with a client, Rodney reveals that he and Mike opted not to fire the now-demoted Kenny, but instead put him in charge of “advertising”. Kenny is then shown wearing an embarrassing tire costume and dancing for passing motorists. 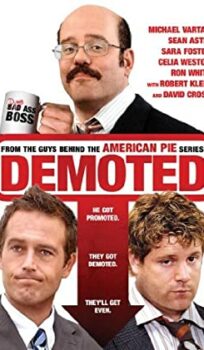