At George’s (Walter Matthau) garden party, Switchblade Sam (Christopher Lloyd) enters his home and steals his gold coins from his safe. Dennis (Mason Gamble) sees this and tries to tell George about it, distracting him and making him miss the quick blooming and death of his special flower. Angered over this, George harshly tells Dennis how much he hates him, and a distraught Dennis flees into the woods. He crosses paths with Sam, who captures him and takes him to a train overpass above a river, intending to use him as a hostage. George sees that he was robbed and knows now what Dennis tried to do, so he helps Dennis’ parents and the town look for Dennis.

Sam soon realizes capturing Dennis was a mistake when Dennis’ antics cause him great harm. While assisting Sam out of the river using rope attached to an old train message post and down through a hole in the overpass following one such antic, Dennis finds George’s gold and realizes that Sam is the thief. Sam goes to kill him, but a passing train grabs the rope, pulling him up to the roof of the overpass and squeezing the breath out of him, and then the rope snaps, and he falls into the river and is knocked out.

Dennis returns to George’s home in the morning with Sam tied up on his wagon, and he gives George his gold back and they hug. Dennis parents come out and joyfully hug him, and the local kids arrive and commend him for catching Sam. The cops take Sam away.

In the evening, Alice (Lea Thompson) mentions to the Wilsons and Henry (Robert Stanton) that her company told her she won’t be traveling for them anymore, for she needed to stay with the project at home, and that they were going to open a daycare so Dennis could come to work with her. George scoffs at that, saying that he’d take care of Dennis during the day, but he changes his mind when Dennis accidentally flings a flaming marshmallow onto his forehead. The movie ends with Dennis, at Alice’s workplace, making a fool out of the obnoxious Andrea (Melinda Mullins) with his antics. 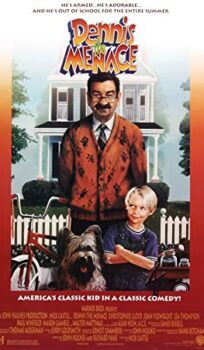