Michael Bosworth (Mickey Rourke) escapes from jail with the help of his lawyer Nancy (Kelly Lynch).  He and two accomplices (David Morse and Elias Koteas) take a family hostage.  The father (Anthony Hopkins) is divorced from the mother (Mimi Rogers) although he’s trying to win her back.  The house is already up for sale, which is why Bosworth picked it.

Bosworth and his cohorts terrorize the family, making the father withdraw a large sum of money from the bank and slapping everyone around at the slightest whim.

A real estate agent shows up and Bosworth kills him.  Albert (Morse) decides to go off on his own to dispose of the body, attempts to kidnap a woman (with blood all over his clothes!), and is shot dead by the FBI.

The FBI doesn’t believe Nancy had no role in his escape and harasses her into giving up Bosworth in exchange for pleading to a lesser charge.

Nancy shows up at the house, and the FBI raids the place shortly afterwards.  Wally (Koteas) is killed during the raid.  Bosworth holds a gun on the mother but the father reveals he took the bullets.  He drags Bosworth outside and leaves him for the FBI.  Bosworth cries out, refuses to surrender, and the FBI shoots him dead. 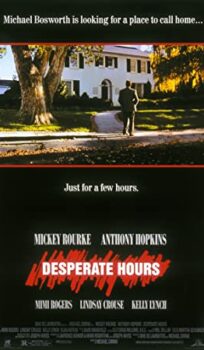