Long version:
After the events of the first film, Gru (Steve Carell) has retired from being a villain and is now a dedicated father. When a mysterious ship is seen abducting a secret lab in Antarctica, a group known as the Anti-Villain League, led by  Silas Ramsbottom (Steve Coogan) recruit Gru to investigate and catch the culprit. He is teamed up with Agent Lucy Wilde (Kristen Wiig).

They go undercover at a shopping mall to spy on potential suspects. One of the suspects, Eduardo Perez (Benjamin Bratt) leaves Gru feeling uneasy, as his appearance reminds him of an old villain, El Macho, who died years ago.

After a series of events, Gru and Lucy develop feelings for each other. But before Gru works up the courage to ask her out, the Anti-Villiain Leagues arrests another shopkeeper Floyd Eagle-san (Ken Jeong) who had evidence hidden within his shop. With the culprit seemingly caught, Lucy is assigned to a new mission in Australia.

Saddened, Gru and his daughters attend a Cinco de Mayo party hosted by Eduardo. Still suspicious, Gru follows Eduardo to an underground lair, where it is revealed he is in fact El Macho. He framed the other shopkeeper to keep his trail cold. El Macho and his partner have been kidnapping Gru’s Minions to turn them into an army and take over the world.

His partner turns out to be Dr. Nefario (Russell Brand) who earlier in the film left Gru due to missing being evil. El Macho offers Gru to join the team, which Gru declines. He leaves the party with his daughters and ponders what to due next. Dr. Nefario however, has a change of heart when his sees El Macho kidnap Lucy and alerts Gru.

Gru and his remaining Minions storm El Macho’s base and, with the help of his daughters and Dr. Nefario, defeat him. They inject an antidote to the bad Minions, which turn them good again. Gru rescues Lucy from being strapped to a missile and 147 days later, the two marry. 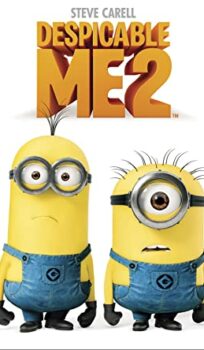