Detective Erin Bell (Nicole Kidman) receives a ink-stained dollar in the mail, a message from her old enemy, Silas. Sixteen years ago Erin went undercover into his gang of bank robbers and he killed her partner and lover, Chris (Sebastian Stan) shortly after she discovered she was pregnant. She makes her way through old members of their gang until she finds Silas, and kills him.

It is revealed that that Silas’s body is the one Erin was called to the scene of at the opening of the movie. As the story loops back around to the beginning, Erin, having been brutally injured in her quest to find Silas, goes back to her car and dies, having gotten her revenge and also after having started to apologize to her daughter for the tough live she’s lived. 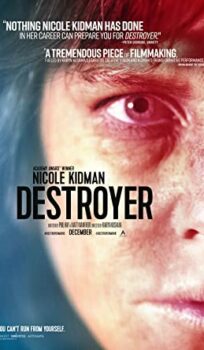