The old west town of Bottleneck is run by a crooked mayor, a dance hall matron (Marlene Dietrich) and a thieving saloon keeper who cheats ranchers out of their land.  When the sheriff tries to intervene, they murder the sheriff.  The town drunk is named sheriff.  The town drunk surprises them by swearing off liquor and taking his post seriously.  He hires Tom Destry Jr. (Jimmy Stewart) as his deputy, the son of famous lawman Tom Destry.

At first the new sheriff is disappointed in Destry.  Destry appears timid and bookish.  Destry shows that he can outsmart the bad guys.  When necessary, he can also outshoot them and fight them.  For example, they need to find the body of the dead sheriff to prove a murder, but their search has failed.  Destry boldly tells them he has the body, so they send a henchman to check where they buried it.  One of Destry’s men follows, and they get the body.

The crooks learn that Destry is bringing in an independent federal judge for the trials.  Before the judge arrives, they storm the jail and kill the sheriff (the former town drunk).  Destry rounds up his supporters and surrounds the bad guys in the saloon.  Frenchy, the dance hall lady has fallen for Destry and turned good.  To avoid bloodshed, she rounds up the town ladies and the ladies storm the saloon.  They think none of the men will touch them, and they try to round up the bad guys themselves.  However, a big free for all breaks out in the saloon.  The saloon keeper tries to shoot Destry, but kills Frenchy instead.  Destry kills the saloon keeper.  Destry ends up sheriff of a now peaceful and orderly town. 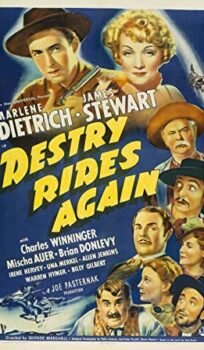