Setup:
Tim Goodman (Justin Smith) goes looking for his missing father, Detective Harry Goodman with the help of his police partner, Detective Pikachu (voiced by Ryan Reynolds), a coffee guzzling pokemon he can understand with has amnesia and Lucy Stevens (Kathryn Newton) an intern at the local news station who was following a lead on a case Detective Goodman was on.

Solution:
Howard Clifford (Bill Nighy) was behind it all the time and the various villians we see including his son and the mysterious woman in pink were actually Howard’s ditto in disguise. He created chemical R made out of Mew 2 DNA which makes pokemon aggressive and violent but can also allow Mew 2 to merge the soul of a human into the body of a pokemon for the goal of forcing all the humans and pokemon in Rime City to merge. Detectives Goodman and Pikachu had released Mew 2 but been attacked by Howard’s genetically modified Greninjas. Harry takes over Mew 2 using a mind control devices and release chemical R at the parade forcing everyone to merge with their partner pokemon. Pikachu fights Mew 2 in the city while Tim fights the ditto in various forms in Harry’s office. They finally release Mew 2 from Tim’s control and Mew 2 agrees to fix the damage in the city, unmerging all the humans and pokemon. Finally he tells Tim that his father was injured on the night of the attack so to keep him safe, he merged him with Pikachu to protect him and his father has been with him the whole time (with amnesia). He unmerges Pikachu and Harry. The movie ends with Tim waiting at the train station to go back home when his father (revealed to be played by Ryan Reynolds) and his Pikachu (now a normal non talking pokemon) arrive. He decides to stay with his father instead and suggests they go get a cup of coffee together. 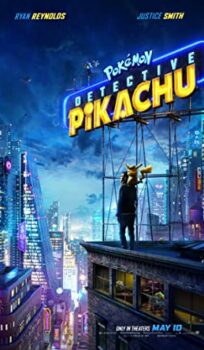