Pooper:
Sander is the time-travelling killer, but his plans to end the worldare foiled by Riley, Clapton and Ione.  Sander is fatally impaled on the bear mascot. Riley and Clapton get together. The film ends with Gordy, revealed to be a plant-based alien, leading his people in an invasion of the Earth.

Long Ending:
The movie starts in popular girl Taylor’s bedroom. She explains to the viewer that to be popular in school, you must be a BITCH – i.e., display Beauty Intelligence Talent Charisma and Hoobastank. She continues on a narcissistic rant, pointing to a poster of a movie-within-the-movie called “Cinderhella” (about a princess-based slasher) and calling it genius. Suddenly, a person dressed as the Cinderhella killer appears in her room and brutally stabs her to death before throwing her out the window.

We then cut to Riley Jones (Shanley Caswell) who describes herself as the biggest loser in the school. She notes there was one bigger loser, a girl in 1992 who was photographed giving head to the school’s full-sized stuffed grizzly bear mascot, but that was so long ago nobody cares. Her dad is also an alcoholic.

At school, we meet Riley’s neighbor Clapton Davis (Josh Hutcherson). He is dating  cute cheerleader Ione (Spencer Locke) who is obsessed with 90s culture. Ione’s ex-boyfriend, football player Billy Nolan (Parker Bagley), is angered that a slacker/hipster like Clapton is dating his ex and challenges him to a fight. A science geek named Meanwhile, Toshiba (Jonathan Park) is messing around with the school’s stuffed bear mascot in an attempt impress a goth/African-American classmate named Mimi (Tiffany Boone). While doing so, he accidentally rips off the bear’s claw to discover its insides consist of super-powerful magnets and other electronics. A guy named Sander Sanderson (Aaron David Johnson) is the only one who hangs out with Riley, though he mainly does so to try and sleep with her. The school is run by  a heavily-scarred principal named Verge (Dane Cook) who patrols the hallways insulting students. We learn that Principal Verge told Clapton that if Clapton doesn’t earn an A or save the universe in the next few weeks, he will be expelled from school.

Riley’s day goes poorly. As a vegetarian, she attempts to win an anti-meat debate against a Canadian student named Gord (Travis Fleetwood), who soundly beats her (and convinces her to eat a hamburger). She tries to commit suicide, and is attacked by the Cinderhella killer while hanging from a noose. She manages to escape both the noose and the killer and runs outside where she finds Clapton outside about to fight Billy. Clapton has trained for the fight by watching Patrick Swayze movies and mimicking his style, though Sander suggested he watch and mimic Steven Segal. The fight is broken up by the police, who inform the students that Taylor was murdered. Riley reports that she was attacked by the same killer, but the police don’t think she was popular enough to have been targeted.

We flashback and learn that Ione and Riley used to be good friends. Ione encouraged Riley to ask Clapton out, but the next day, Ione suddenly swooped in and took Clapton for herself. Their friendship has since deteriorated. At the football game that night, the ball begins sticking to Billy’s hands and he begins puking acid. Riley is the only one who notices, and she confronts him. Billy says that as a kid, he once found a space meteor and touched it. The meteor ended up giving him fly-blood (he even sprouts fly-wings when having sex). He explains that’s why Ione left him. Later that night at a party, Riley gets drunk in anger at Ione and Clapton’s PDA. She allows Sander to begin groping her in an attempt to make Clapton jealous and he accidentally exposes her boob. Another student whips out his phone to record her breast. At that moment, Billy is attacked in an upstairs room by the Cinderhella killer and murdered. The killer throws Billy’s corpse out the window, which is caught on the video of Riley’s boobs.

We cut to the Planet “Starclaw” and see aliens abduct a bear living on that planet. This bear is now the stuffed mascot in the school explaining why it had electrical innards as it is an alien. We also do a flashback to 1992 where we discover that a teenaged Verge asked Ione’s mother Sloane to prom and she turned him down. He tried to build a bomb to blow up the school, but he failed and ended up setting himself on fire and causing his scars.

Back to the story, Principal Verge accuses the kids of producing a snuff-porn and puts them all in detention on prom night until one of them confess to being the killer. The group consists of Riley, Clapton, Ione, Gord, Sander, Mimi, Toshiba, and Toby T. (Marque Richardson), the self-described most-boring kid in school. While in detention, they meet a guy named Elliot Fink (Walter Perez) who has been in detention for 19 years for taking the picture of the girl giving head to the bear. He recognizes Ione, and we learn that Sloane contacted aliens, which allowed her to switch bodies with her daughter. Sloane is now in Ione’s body (thus why she betrayed Riley to steal Clapton) and Ione is in Sloane’s high school body in 1992.

The kids try to determine who the killer is by illegally downloading and watching the Cinderhella movies, but in each movie all the teens are slaughtered by the killer without the motives being revealed. Suddenly, Elliot yells he has finished an equation he has been working on and realizes that the world is ending in six minutes… in 1992. Toshiba explains that after realizing that the bear was techno-organic, he modified it into a time machine (to impress Mimi and get an A in his quantum physics class) and the killer must have used the machine to travel to the past and change it. They then realize that Sander and Clapton have disappeared and soon discover Gord and Verge have been murdered.

Riley goes back in the time machine and discovers that Sander is the killer. Clapton also time-travelled back after realizing realized it before everyone else that Sander was the killer, but got distracted trying to kille him by attending school in the 90s and  earning an A (thus avoiding expulsion in the present). While in the past, Riley meets her teenage father and tells him to stop drinking. She and Clapton finally find Sander, who has helped young Verge build a world-destroying bomb instead of the dud he actually built. The bomb detonates, but Clapton and Riley make it back to the time machine and go back in time again.

This time, they find Ione (in Sloane’s body) who is thrilled to see her friends. Ione explains she wants to stay in 1992 because it is so easy to be cool since she knows all the trends. They explain that Ione as Sloane must go to prom with Verge or else Verge will destroy the world. Ione protests, but eventually agrees to Verge’s date. The After Ione/Sloane agrees to the date Verge disarms the bomb , they return to the bear/time machine and fine the door jammed. Riley goes on her knees and starts tugging on the door handle, which looks like she is giving the bear head. Emmet from the past catches her in the compromising position and takes the picture (meaning Riley has been the biggest loser since 1992) and is then sent to detention for doing so. Riley unjams the door and returns to the present with Clapton  to go to prom.

At prom, they are named king and queen, and Toby T. shakes off his shy demeanor and leads the band in a rousing rendition of Mmmm-Bop. Riley and Clapton leave the dance for some privacy and are about to kiss when Riley realizes that they didn’t change everything as Taylor and Billy are still dead (they changed history enough that Gord and Verge are still alive). They are attacked by Sander in his Cinderhella costume, who explains he thinks the world is boring except for Riley, and now that she is with Clapton, he intends to destroy the world. The three fight (Clapton using Swayze’s fight style and Sander using Segal’s fight style) and Sander gets the upper hand. He is about to kill Riley with the axe when the bear mascot’s magnets are activated and it pulls Sander (holding the axe) into its fangs, fatally impaling him. Clapton saved the universe and got an A, so he is no longer expelled.

In the end, we see that Elliot finally is finally released from detention. Toshiba is dating Mimi. Verge was not only not-scarred as a teen, but Ione (in Sloane’s body) ended up really liking him and they are now married (though Sloane, still trapped in Ione’s body, grounds her “mother” on a consistent basis). Riley is a committed vegetarian again and her message to her father in the past caused him to quit drinking. She is also now dating Clapton. The film ends with Riley and Clapton watching the news when aliens invade. Gord appears on TV, revealing that he is actually an alien of a plant-based species. They are attacking the Earth for committing genocide against plants. Riley stares at her tofu sandwich as the credits roll. 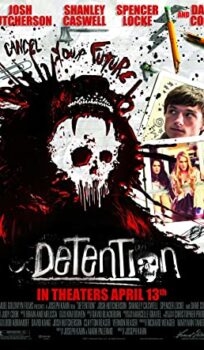