Tina Balser (Carrie Snodgress) feels oppressed by her stuffy, overbearing husband Jonathan (Richard Benjamin) She tries to liberate herself by having an affair with the free-spirited writer George Prager (Frank Langella), but learns that he is equally oppressive in his own way and that he cheats on her regularly himself.

Late one night, Jonathan tearfully confesses all his own failings. He admits that he’s a terrible husband, that he has cheated on Tina, and that things are going very badly at work. He begs Tina for another chance.

Tina tells her psychiatrists and the other members of her therapy group what has happened, but they are unsympathetic, and castigate her for her hypocrisy in making Jonatahan feel guilty when she has committed adultery herself.

As the movie ends, Tina feels confused, overwhelmed, under attack, and hopelessly alone. 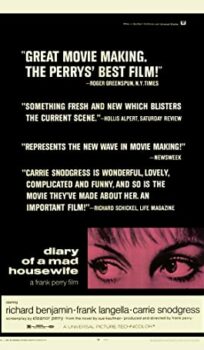