Patricia Carroll (Stephanie Powers) thinks she is doing a good deed by visiting her dead fiance’s mother, Mrs. Trefoile (Tallulah Bankhead in her final film role).  Unfortunately, Mrs. Trefoile is a religious fanatic who believes dead Stephen and Patricia should still be together.  Mrs. Trefoile locks Patricia in the attic, starves her and makes her listen to endless Bible readings.

Mrs. Trefoile witnesses butler, Harry (Peter Vaughan), sexually assaulting Patricia, lures him into the basement and shoots him dead.  Mrs. Trefoile lies to Harry’s wife, Anna (Yootha Joyce) and tells her that Harry left for London for a few days.

Patricia’s current fiance, Alan Glentower (Maurice Kaufmann) stops by Mrs. Trefoile’s to find out why Patricia never returned from her visit.  Mrs. Trefoile tells Alan that Patricia left long ago.  Alan leaves, stops at a local pub where he finds waitress, Gloria (Gwendolyn Watts), wearing Patricia’s broach (Harry was a playboy and had given it to Gloria).

Alan sneaks back into the Trefoile house, grabs Anna and is knocked out by the mentally disabled groundskeeper, Joseph (Donald Sutherland). They are going to lock Alan in the garage.  That’s when Anna figures out that Harry never left because the car is still in the garage.  Anna works with Joseph and Alan to find Patricia and Mrs. Trefoile, who are now at the secret basement shrine to Stephen. 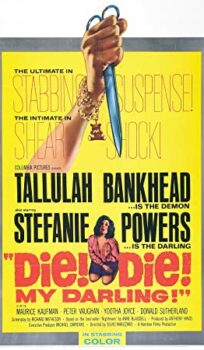