“Simon” (Jeremy Irons) is actually Hans Gruber’s brother (from the first Die Hard). He used the fake bomb-in-a-school thing to distract cops while he and the other bad guys took all the gold from the Federal Reserve Bank. He also tricks everyone into thinking that he used the real bomb to blow up all the gold on the boat.

John McClane (Bruce Willis) finds out that Simon took all the gold to Canada and plans to fly to Germany with it.

John and Zeus (Samuel L. Jackson) with the help of the cops kill Simon and his killer girlfriend, arrest all the guys and get back the gold. 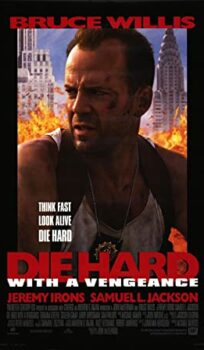