In a “what if” scenario John Dillinger (Martin Sheen) was not gunned down on July 22,1934; his brother was. Dillinger hides in obscurity under the name “John Dalton”. However, Al Capone (F. Murray Abraham) finds out he is still alive and blackmails him into recovering a hidden fortune so Capone can be on top again. Assembling the crew, Dillinger retrieves the money, though his friend Sam is killed in the process. Cecil, Capone’s butler is given a cut and disappears, afraid that Capone, stricken with syphilis that has driven him mad, will kill him.

Dillinger and remaining crew member Billy are hiding in a church and are about to leave when Billy is killed by two former FBI agents looking to reclaim their badges. Seeing the money, they devise to steal it but one turns on the other. Dillinger throws a Molotov cocktail at the remaining agent and he and the money are set ablaze.

Dillinger returns to Capone’s residence and retrieves his kidnapped family. At this point, syphilis has fully overtaken Capone who does not realize that the plan has gone south and he will not have the funds necessary to reclaim his former spot in the underworld. Dillinger and his family leave.

Title cards state Capone died in 1947 due to his syphilis. The whereabouts of his fortune were never determined. The FBI conclude that John Dillinger did die on July 22, 1934. However on August 5, 1976, a 73 year old man died two weeks after his wife passed. His stepson buried him with a simple marker of John Dalton. 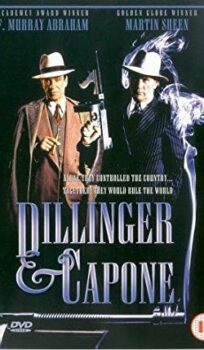