At the dinner, Barry (Steve Carell) is paralyzed by Therman (Zach Galifianakis) and is likely to lose the trophy for best guest/idiot.  Tim (Paul Rudd) gives Barry a pep talk.

We find out that Therman stole Pudding (Barry’s ex-wife), because Barry lost her clitoris.  Therman found it and Barry found them in their wedding bed.  Tim convinces Barry that while Therman may have mind control Barry has brain control.  This new power of Barry’s throws Therman off and he leaves the dinner early.  Barry wins the trophy and Tim looks like he is on his way to the executive 7th floor.  Tim decides that executives who make fun of others is not the kind of group he wants to be in so he essentially quits.

The end has a bunch of taxidermied mice dioramas explained by Barry of what happened with each group of characters.   Kieran (Jemaine Clement) and Barry collaborate on a bunch of art works his paintings and Barry’s mouseterpieces.  They even created a statue of Müeller’s missing finger with family crested ring and quote ‘My wife’s favorite finger’ for his changed factory into Max Müeller Museum of Modern Art (MMMMA).

Barry and Darla (Lucy Punch) get together.  Darla leaves clues so that Barry can find the clitoris.

Tim and Julie (Stephanie Szostak) are both out of a job but get married and have a honeymoon in Paris with Barry under the bed. 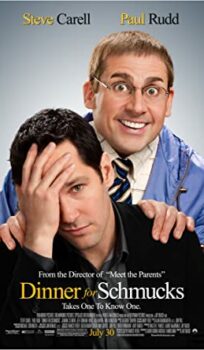