SHORT VERSION:
Rebecca eventually understands that she needs to focus on being with someone who genuinely cares about her, and she realizes that someone is her friend John, who has been nothing but supportive and caring to her before and after she broke up with Richard. She especially realizes this after he pawns one of his prized guitars to buy a new set of photography equipment for her, since Richard destroyed her previous set out of spite. They end up together at the end of the film.

LONG VERSION:
After taking a two-week break from dating and one-night stands following a few disastrous episodes (and failing to get any revenge on Richard [Victor Webster] or Mandy [Jessica Collins], the woman he cheated on her with, in the process), Rebecca (Jenny McCarthy) goes out for a night on the town with John (Eddie Kaye Thomas), Carrie (Kam Heskin), and Michelle (Carmen Electra). While hanging out at a bar with them, she spots Richard and Mandy entering the establishment, and she eventually goes up to Richard and simply asks him why he cheated on her. Victor nonchalantly replies that he doesn’t know why, then tells her to leave him and Mandy alone. Rebecca tells him that he knows exactly why he did it, because the night before it happened, they looked at each other and said that they would always be together, and she believed him. Richard tells her that their relationship was over a long time ago; she just wasn’t giving him what he needed (that being a lot of sex), and he lastly states that he doesn’t care about her and doesn’t know if he ever did, then repeats his demand for her to get away from him and Mandy. Just then, John comes to Rebecca’s defense by decking Richard and knocking him out. He exchanges smiles with Rebecca after this, but then Sara (Renee Albert), a tall woman who has bothered John more than once during the film, suddenly comes up to him and holds him tightly to her since this act turned her on. This causes Rebecca to exit the club, after which she hails a passing motorcyclist named Kevin (Lochlyn Munro), and she flat-out tells him that she wants to have sex with him, no questions asked. She then hops onto Kevin’s motorcycle and gets taken to his place, but after he proves to be terrible at foreplay, she loses interest in the whole idea and takes a lonely walk back to her apartment.

When she gets in, she is pleasantly surprised to find some brand-new photography equipment resting on her dining table (Richard had destroyed her old set of equipment out of spite) with a handwritten note from John attached to it saying “This is your future”. John then enters, and when she asks why he did this for her, he tells her that he did it because he considers her the most beautiful girl in the world and he hated to see her unhappy, so he knew that, if he got her this stuff, her world would come together and it would make her life better, and she deserves the best life in the world. When it seems like they are about to kiss, Rebecca tells him that she can’t do this, saying that it just wouldn’t work between them. John walks out the door disappointed, and Rebecca instantly regrets what she just said, so she goes over to his apartment and knocks on his door. When he won’t answer, she gets inside using the spare key he keeps hidden at the top of the door frame, and she soon notices that he sold one of his prized guitars to pay for her new equipment. She gets in her car and drives off to look for him, and thankfully, it doesn’t take long for her to find him walking down a nearby street. She tells him that she never meant to hurt him; she has just been through so much lately that she can’t handle being in a relationship right now. John confesses that he has been in love with her since the first moment he saw her, and he really thought that, if he was patient, things would just work themselves out, and he sat and watched as she chose to be with someone who treated her badly instead of someone who really cared about her. He tells her that he is right here, and he is putting his heart on the line here and it seems like she doesn’t care at all. She replies that she does, and when he asks why, she doesn’t answer. As he continues to walk away, she whispers that she is scared.

Seconds later, John gets his shoe stuck in some wet soil next to a nearby tree, so he decides to abandon it and walks across the street to catch a bus heading somewhere else. Rebecca gets out of the car and gets the shoe free, then notices that it’s white in color and its brand name is Pony. Suddenly, she realizes that John must be the “white pony” that the fortune-teller told her about at the start of the film that will give her the happy ending that she desires. She yells out to John that he is her “white pony”, but sees that he has already boarded the bus, so she chases after it on foot. She soon leaps up and grabs hold of the window next to John’s seat and shouts that he is her “white pony”, so he makes the driver stop the bus, then gets out and shares a passionate kiss with Rebecca while fireworks go off in the background (for some unknown, contrived reason). Rebecca and John then walk off down the street hand-in-hand.

During all of this, Rebecca narrates that she guesses that what we are all supposed to do is find someone whose soul illuminates as brightly as yours, to grow within all the right ways. Once you let go of dirty love, your heart can open up to the highest love of all: Pure love – the kind of love you’ve waited your whole life for. 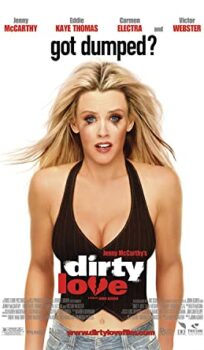