Larry Rayder (Peter Fonda) and Deke Sommers (Adam Roarke) are a car racing duo (Larry is the driver, Deke is the mechanic) who have just stolen $150,000 from a grocery store and plan to use the money to buy a racecar and try to get into the NASCAR circuit.  Their plan has a hiccup when Larry’s one-night stand from the night before Mary Coombs (Susan George) hitches a ride with them in their getaway car and refuses to leave.  They repeatedly try to ditch her, but she took the map they need to get away, so they allow her to stay.  Meanwhile, Captain Franklin (Vic Morrow) is leading the police chase of the grocery store robbers.  They are driving a Chevy Impala at first, but after they switch to a Dodge Charger, the police are unable to keep up with them.  They also can’t keep up because the trio have a police radio in their car, and they know where the roadblocks are and can avoid them.

The trio eventually drive to a walnut grove, so Franklin has to use a helicopter to chase them.  He is able to keep up with them for several miles, but he has to break pursuit when the helicopter runs out of fuel.  Knowing that he will never be able to catch them while in their car, and also knowing that they have a police radio, Franklin pretends to call his cars into roadblocks.  He is doing this so the trio will either run out of fuel or crash, and then they can be caught.  Once the trio realize that the roadblocks are fakes, they exit the walnut grove, thinking they got away from the police.  However, just as they are about to cross railroad tracks, a freight train appears and they crash into it.  The car explodes, killing them instantly. 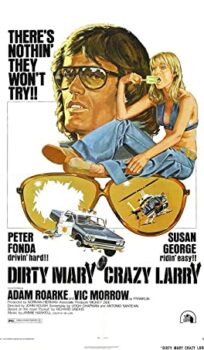