He meets Lawrence Jamieson (Michael Caine) who cons rich widows out of huge sums, and lives in a mansion.  Freddy becomes Lawrence’s apprentice, although their relationship remains hostile.  They make a bet, whoever can scam Janet out of $50,000 wins and the other has to leave town.  Janet is a wide eyed naive young american lady.

Freddy pretends to be an injured war hero, who needs $50,000 for surgery to walk again.  Lawrence then pretends to be the doctor who can do the surgery.  Janet reveals that she is not an heiress, she is the “soap queen” because she won a trip to Europe in a contest sponsored by a soap company.  She has mortgaged her house to get the $50,000.  Lawrence from rich widows, but only a small fraction of their money. He has a conscience and does not want to leave Janet destitute.  He tells her to leave town and he will take care of Freddy.

The next morning, Lawrence is surprised to find a tearful Janet in the lobby.  Freddy has stolen her $50,000 and her jewelry and other valuables.  Lawrence takes pity, gives her $50,000 of his money and puts her on a flight home.   Freddy shows up at the airport and reports that Janet robbed all his money and left him handcuffed to the hotel bed.  Janet has left a note for them.  She reveals that she is the notorious con artist, “The Jackal” and tells them, “Fellas, last year I made 3 million dollars, but your 50 thousand was the most fun.” 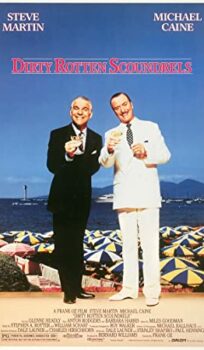