Mitch (Norm Macdonald) and Sam (Artie Lange) get hired by an elderly woman, Mrs. Murphy (Jessica Booker), to use their tactics to help save her house from being bulldozed as part of a plan devised by real estate mogul Travis Cole (Christopher McDonald) to turn the entire block into a parking lot for the Chelsea Opera House that his company is renovating. Though they sabotage the bulldozer before it can tear down the house, they leave a trail of evidence at the scene that leads all the way to their office, so the cops easily find them and throw them in jail. Cole later watches a TV news report about what Mitch and Sam have done and how the woman who hired them views them as heroes, and after the reporter suggests that Cole is the villain in all of this, he remarks to his underlings that this looks bad and they need to put a stop to it.

Cole posts Mitch’s and Sam’s bail and conducts an interview with them outside the police station, where he first apologizes to Mrs. Murphy before saying that he has dropped all charges against Mitch and Sam. Afterward, Cole tells them that he has a job for them, and after taking them into his office, he tells them that he wants them to vandalize 99 Franklin Street, a small, low-income, walk-up apartment building that he claims to own. He explains that it has become a den of criminal activity, so if they were to vandalize the building, it will become condemned, which will enable him to legally evict the tenants. After that, he will fix up the place and rent the apartments out to honest, hard-working people. Mitch and Sam agree to do the job for $50,000, which is what they need to pay Dr. Farthing (Chevy Chase) to get Pops (Jack Warden) his heart transplant and is what Dr. Farthing needs to pay off his bookies. Sam gets the first part of the plan in motion by slipping messages under the doors of each tenant’s apartment, ostensibly from management, saying that the building will be tented and sprayed for termites from noon Saturday until noon Sunday, so that way the tenants will have to leave the building. Mitch develops some reservations about going through with the job after finding out that Gladys (Kay Hawtrey), the grandmother of his love interest Kathy (Traylor Howard), lives in the building, but the reservations are not strong enough to dissuade him.

Mitch and Sam complete their task, but while celebrating back at their office, they see a news report on TV about it and find out that Kirkpatrick (Hrant Alianak), the guy who owns their office, is the real owner of the building. They also find out that all of the tenants have had to move to a local homeless shelter, and Cole has bought the place and intends to level it for his parking lot. Mitch and Sam immediately head over to Cole’s office building to speak with him, but they are thrown out by security. However, they manage to get in after paying three homeless guys sitting outside to run into the building and cause a scene so security will be distracted with them. Mitch and Sam enter Cole’s office and demand that he pay up, but Cole refuses, and he admits to lying about owning the apartment building before wishing them good luck on trying to prove it. He tells them that, after what they did to his bulldozer, he couldn’t let them go unpunished, so he had them do what they did as a means of helping him and hurting them at the same time. He then has them thrown out of the building again. Mitch tells Kathy about what he and Sam did and acknowledges that they made a bad mistake, but he tells her that they needed the money. As she rebukes him for what he’s done and accuses him of only caring about money, he tries to tell her that they needed the money to pay for Pops’ heart transplant, but she refuses to let him explain himself and cuts her ties with him. When Mitch and Sam report their failure to Pops, Pops decides to come clean with Sam and inform him that Mitch is actually his half-brother (he had already confessed this to Mitch, but he made Mitch swear to keep it a secret); he, his mother, and Mitch’s mother were swingers back in their younger days, and he got Mitch’s mother pregnant. Shocked over this revelation, angry with Mitch for not telling him this himself, and faced with the fact that Pops is now going to die, Sam tells Mitch to stay away from him.

The next morning, Mitch goes over some of the past messages he made on the miniature tape recorder that he always carries around, and he discovers that he actually recorded Cole’s entire confession to him and Sam, having unknowingly left the recorder on at the time. He finds Sam as he is trying to get back into Cole’s building in a desperate bid to get the money, and he informs him that he has Cole’s confession on tape and that he has a plan to both get the money and save the apartment building, but he needs his help. After the duo officially reconcile, they visit Kathy, Gladys, and the rest of the tenants at the shelter and tell them that they know of a way to get their home back. When Kathy asks why they should believe them, Mitch replies that he used to walk through life living by the sole principle of never taking crap from anyone, but that all changed when he found himself doing something for someone else, and he finally tells her that he and Sam were trying to earn $50,000 to get a heart transplant for their father. Mitch says that, sometimes, when you are doing something for someone else, it’s not just revenge – it’s standing up for yourself. He then asks everyone to join him and Sam in standing up against Cole because he screwed them all, and Kathy and the tenants agree to help them. The guys also tell Kirkpatrick about their plan and get his support, and they also secure the aid of the three homeless guys, a group of prostitutes that they used in an earlier revenge job, their nose-less friend Jimmy (Chris Farley), and even Pops.

Sometime before the opera Don Giovanni is scheduled to make its debut at the grand reopening of the opera house with Cole among the attendees (since he sponsored this event), Mitch and Sam sneak in and put hallucinogenic brownies in the staff room, which are eaten by all of the ushers and ticket takers, leaving them incapable of doing their duties for the night. Mitch and Sam then collect their uniforms and give them to Kathy and the tenants so they will act as the staff, which will give Mitch the ability to approach Cole without fear of being ejected from the place. Mitch also gives a brownie to the star tenor so he can’t perform. The homeless guys go wandering around the audience and spread their stench everywhere, and shortly after the opera starts, Pops walks onto the stage and starts trying to hit on the prima donna. As Cole tries to leave his balcony seat to stop Pops, he is halted by Mitch and the prostitutes, and Mitch then tells Sam to have Jimmy unleash a trio of skunks that he brought along. The skunks are set loose upon the audience, causing them to panic and flee.

As Cole despairs over this and the press starts to take pictures of him, since he openly took credit for overseeing every aspect of this production and said it would be the finest staging of Don Giovanni ever presented, Mitch plays back his confession on the tape recorder and tells him that the reporters would probably love to get their hands on this tape. He then blackmails Cole into first making out a check to Dr. Farthing for $50,000, then he summons Kirkpatrick to come up and punch Cole in the stomach before forcing Cole to sign a contract returning ownership of 99 Franklin Street back to him. Mitch then summons Dr. Farthing and hands him the check, but he turns his back to Cole while doing so, and after Farthing leaves, Cole snatches the recorder out of Mitch’s pocket and records a mocking message over the confession reminding himself to stop payment on the check. He then takes out the tape and throws the recorder away, and after telling Mitch that Kirkpatrick’s contract won’t hold up for ten seconds once his lawyers get through with it, he yanks the ribbon out of the tape. Mitch then reveals to Cole that he anticipated this because he has a second copy of the recording all set to go on the house P.A. system. Cole angrily tackles him over the balcony and onto the floor, where they both land on the prima donna as she is still trying to escape Pops, and though she and Mitch are okay, Cole is knocked out. By the time Cole awakens, his confession has already been played, and he gets arrested for fraud.

Mitch, Sam, Kathy, and Gladys visit Pops in the hospital after his successful heart operation, and we find out that he and Gladys have started seeing each other. As Mitch ends the film riding with Kathy in his car, he narrates how happy he is at the fact that he and Sam got great jobs, Pops got his heart, and he got the girl. He also adds that Dr. Farthing got over his gambling addiction, but his bookies beat him to death anyway.

t him to death anyway. 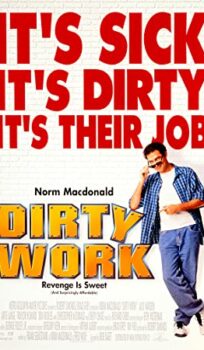