Sancho (Clifton Collins Jr.), haunted by the ghost of the innocent man he killed during crooked sting with his partner Salim (Cuba Gooding Jr.), decides to report his illegal activities to Internal Affairs, who, in turn, want him to incriminate his partner and the rest of the department. The Lieutenant (Cole Hauser) set up Sancho and Salim to be killed, first by Baine (Wyclef Jean) and his gang in a robbery at Rolando’s Canadian drug spot, but the robbery is botched when Splooge (Khleo Thomas) successfully runs away with the kis of coke and Salim is shot in the thigh. Sancho and Salim escape with Rolando’s money, hide it, and head to a empty safe house where Salim can treat his gun wound. He then sends Sayed (Brian White) and Rodriguez (Nicholas Gonzalez) to kill them at the safe house, while Wallace (Tory Kittles) and the Lieutenant kill their families. Sancho kills Sayed and Salim, after learning the truth from Rodriguez, shotgun blasts Rodriguez’s hand off and kills him.

They take off in Rodriguez’ caddy only to be captured by Rolando’s men and to be taken to Rolando (Robert Lasardo).  Sancho used to be in Rolando’s gang. Rolando, after playing games, eventually shoots Sancho in the head in front of Salim, after Salim tells him where Rolando’s money is hidden. Rolando’s men take Salim to the spot only to find it teeming with cops. Salim runs out of the car back to the police custody. The police recover the money from where Salim hid it, and also the coke from kids who OD’ed using it after they found it where Splooge hid it. Salim goes before the Lieutenant who apologizes for setting him and Sancho up and killing their families. Salim, after seeing the ghost of Sancho in his car, is killed by Rolando’s men in a drive by shooting. Rita, the girl he molested, does not kill him.

After the credits roll, we see Splooge meet up Rita (Aimee Garcia) and kiss her on the beach. 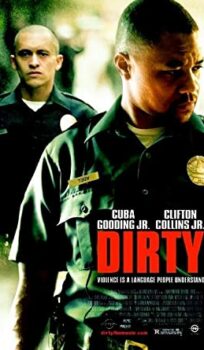