While in the process of clearing District 9, a slum outside Johannesburg where the marooned aliens, derisively called “prawns”, have been gathered, Wikus Van De Merwe (Sharlto Copely) is inadvertently sprayed with a mysterious alien fluid and begins a “David Cronenberg’s Fly-like transformation” into an alien.

Wikus is hunted by the Multi-National United Corporation, who wants him because his mutated left arm can fire the alien’s advanced weaponry and which has the canister of alien fluid from which Wikus was sprayed. Wikus hides in District 9 where he befriends a prawn named “Christopher Johnson”, who promises to restore him to human form if they recover the alien fluid. The two break into MNU headquarters and recover the fluid. While doing so, Christopher sees that MNU has been dissecting captured prawns.

When Wikus sees Christopher about to be killed by MNU forces, he finally is overwhelmed by guilt about the whole situation, (since all the aliens wanted to do is go home and the alien have been treated like crap by humanity for 20 years). With the help of Christopher’s son, Wikus uses an “Iron-Man-like” suit, constructed by the aliens and given to a local warlord in trade for some cat food (which the aliens like to eat) and which Wikus can control due to his continuing mutation, to blast through the MNU guards and permit Christopher and his son to reach the command module. The module is tractor beamed into the mothership and the mothership flies away.

Christopher promises Wikus that he will return in 3 years to reverse the mutation process. Humanity is left wondering if the aliens will return in peace or in force. No one knows where Wikus is. The Aliens are moved to District 10 (just a bigger slum) and it is implied (because we see an alien rummaging through a garbage pile fashioning pretty trinkets, like Wikus used to do for his wife) that Wikus has fully mutated into an alien. 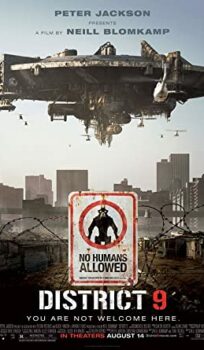