In a futuristic Paris, a ghetto is walled off from the rest of society with the result being that gangs take over.

Leito (David Belle) is a ghetto resident who fights the gangs and destroys a stash of drugs that belongs to a gang leader named Taha. Damien (Cyril Raffaelli) is a cop from the outside who is assigned to stop a hijacked Neutron bomb threat of Taha.

Leito and Damien join forces and take down Taha and his gang. Our heroes are about to use the deactivation code for the bomb that a government agent gave them, but figure out that using it would actually blow up District B13.

The public finds out and the wall is torn down. 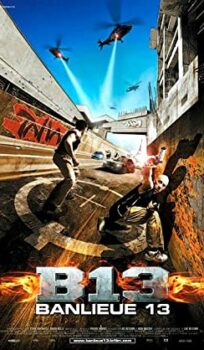