Long Ending:
The film opens in a small island town called Cradle Bay. A jock clad in a blue-letter-jacket is making out with a girl in his car while Gavin Strick (Nick Stahl) watches from the nearby woods. As the jock gets aroused, his eyes glow red and in a violent fit, he snaps the girl’s neck. The police happen to show up and the jock, still enraged, kills one of the officers before he is subdued. The other officer calms him down and assists the jock in hiding the bodies. Gavin flees back home.

The next morning the Clark family moves to town. The family includes high-schooler Stevie Clark (James Marsden) and his younger sister Lindsay (Katharine Isabelle). They have moved to Cradle Bay from Chicago after Stevie and Lindsay’s brother committed suicide.

Gavin and his albino friend U.V. (Chad Donella) quickly befriend Stevie, though Stevie doesn’t approve of their stoner-habit. Gavin explains that the school is ruled by a group of blue letter-jacket wearing jocks named the “Blue Ribbons.” Stevie is also introduced to Gavin’s friend Rachel (Katie Holmes), who is from the wrong side of the tracks. Stevie soon develops a crush on her. Gavin also introduces Stevie to the crazy school janitor named Dorian Newberry (William Sadler), with whom he has developed a friendship.

Although the Blue Ribbons appear to be wholesome over-achievers, they are prone to violence and dismissive of all others not in their group. Gavin believes there is something sinister about them, especially since some members were formerly stoner friends of his. The Blue Ribbons’ aggression seems to flare up whenever the teens become sexually aroused. The Blue Ribbons club is presided over by a doctor named Edgar Caldicott (Bruce Greenwood), and parents throughout Cradle Bay apply to Dr. Caldicott to enroll their children in the group. Gavin and Stevie discover that Gavin’s parents have successfully applied to have Gavin join the group. After learning this, Gavin threatens to shoot his parents and anyone else in the Blue Ribbons. Stevie disarms Gavin and says he is just paranoid.

The next day, Gavin’s entire demeanor and appearance is changed and he hangs out only with the Blue Ribbons (soon getting his own letter jacket). Stevie tries to talk to his former friend, but is prevented from doing so by the Blue Ribbons who violently beat Stevie up until Dorian interferes. Meanwhile, the Blue Ribbons begin targeting Lindsay to join their group. Stevie begins investigating the Blue Ribbons. One night, Lorna (Crystal Cass), one of the Blue Ribbons, tries to seduce him. In the process her eyes glow red and she starts self-mutilating before trying to kill Gavin. Rachel also learns there is something sinister going on when she watches a DVD made by Gavin before he was forced to join the Blue Ribbons. The pair decide to get to the bottom of what is going on in Cradle Bay.

Rachel and Stevie research Dr. Caldicott and find that he moved to Cradle Bay from a nearby island where he served as the head of a mental institution. The pair break into the institution and find a number of violently insane patients, including Caldicott’s own daughter. They were all victims of prior experiments conducted by Dr. Caldicott (including his daughter).

Stevie also learns that Dorian is only pretending to be crazy so that Caldicott and the townsfolk will leave him alone. The pair also learn that Dorian’s rat traps (which emit a piercing sound that is supposed to drive rats away) causes the  chips to malfunction. Stevie decides to take his sister and leave the island with U.V. and Rachel. When he goes home to get Lindsay, he learns his parents have enrolled him in the Blue Ribbons and he and Rachel are captured by Dr. Caldicott. Stevie manages to escape and rescue Rachel and the twosome reunite with U.V. and Lindsay and speed towards the ferry heading off the island.

The foursome are cut off from the ferry by Dr. Caldicott and his legion of brainwashed teens. When confronted about his past, Caldicott dismisses his daughter as an experiment gone wrong and says that science can’t be stopped. At that moment, Dorian drives up with his car decked out in the rat traps emitting the sound that interferes with the chips. The teens jump on his car to attack the speakers and he drives himself and all the teens off a cliff to their deaths. Stevie (who split from the group to help Dorian) is attacked at the cliff-side by Dr. Caldicott, but ultimately throws the doctor off the cliff to his death as well. Stevie then rides a motorcycle onto the ferry where he kisses Rachel and, along with U.V. and Lindsay, decide to start a new life far from Cradle Bay.

The movie ends with a teacher in an inner-city school where the teens ignore him and misbehave. The teacher is revealed to be Gavin (it is unexplained how he survived the fall from the cliff), whose eyes glow red as he surveys his unruly class. 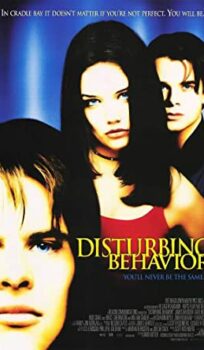