Django (Jamie Foxx) is freed from slavery by a German bounty hunter (Christoph Waltz). Together they kill the men who had sold Django and his wife to separate slave traders.

Django and his new partner work together throughout the winter saving money and agree to find and free Django’s wife (Kerry Washington) in the spring. She is being held by Mr. Candie (Leonardo Decaprio) at a Mississippi plantation called Candieland.

Django eventually frees his wife and blows up Candieland. 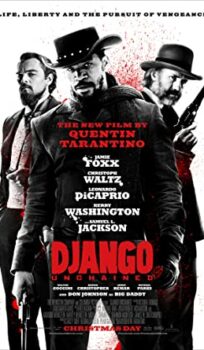