Radio Raheem and Buggin Out go into Sal’s Pizzeria blasting music and screaming at Sal for not decorating his “Wall of Fame” with any photos of African Americans (Sal specifically has photos of only Italian Americans on the wall). Sal (Aiello) smashes Radio’s radio and is then assaulted and dragged into the street while his sons try to stop the mob.

The police arrive and break up the attack but in so doing they kill Radio Raheem while he resists arrest. The crowd blames Sal and his sons for Radio’s death (they had nothing to do with it), and Sal says, “You gotta do what you gotta do.” The crowd becomes angrier and then Mookie (Lee) gets a trash can and smashes Sal’s window and the crowd proceeds to destroy the restaurant, eventually burning it. The crowd then turns to the Korean grocer’s intending to destroy that as well but their anger has dissipated and they eventually turn away.

The next day Mookie goes to Sal and demands his pay for the previous two weeks. Amazingly, Sal gives it to him, albeit by throwing it at him. After skirmishing about Sal paying him too much, Mookie, unimpressed with Sal, takes the extra money and walks off.

The film ends with a quote from MLK about how “an eye for an eye leaves the whole world blind,” followed by a quote from Malcolm X claiming that violence in self-defense isn’t violence at all. 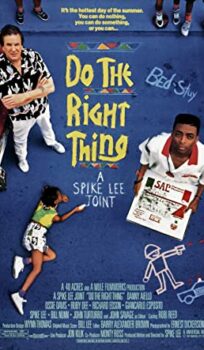