When Ben goes back to his lodgings a while later, he finds Hank (Woody Harrelson) waiting for him. Ben thinks he’s there for a fight, but Hank actually just wants to talk. He tells him that although he can’t give Lou what Ben can, he’s still a better man for her, and that “a man’s gotta do what a man’s gotta do” and that maybe Ben’s life lies in California. Through this, Ben understands that he’s not selfless enough for a life with Lou, so he prepares to end it with her and leave town. However, when he goes to end it with her, SHE breaks it off with him by telling him that she’s marrying Hank, and she gives him a plane ticket to Los Angeles that the whole town paid for. Ben leaves town heavy-heartedly, and Lou is shown crying as he leaves.

Ben gets the plastic surgeon job in Beverly Hills due to a phone call of recommendation from Dr. Hogue, but he soon grows tired of the town’s superficiality. One day, he is told by his secretary that a Southern girl called wanting to meet him at a restaurant, and he goes there to find Nancy (Bridget Fonda) and Hank waiting for him. They both had come out there to realize their goals because, as Hank said earlier, “a man’s gotta do what a man’s gotta do”, and Hank informs him that he ended it with Lou. Ben realizes that Grady is truly where he belongs, so he heads back there and sees Lou. Ben professes his love to her, and after she briefly resists, she and Ben kiss. 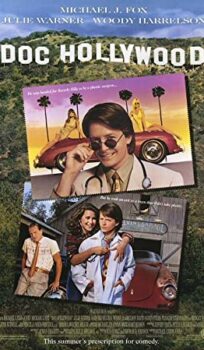