Short version:
Dan Torrance dies at the Overlook Hotel protecting Abra from Rose the Hat (who is killed by the spirits of the hotel). Now one of the hotel’s spirits, Dan chases Abra with an ax, but Abra manages to bring out the real Dan long enough to escape. Dan is visited by the ghost of his mother as the Overlook blows up around him. Sometime later, Dan’s ghost visits Abra to give her guidance–just as Holleran had done for him. Abra tells her mother about her gifts and her mother accepts it. As the movie ends, Abra faces one of the ghosts from The Shining, who has followed her, to imprison it in her mind–just as Dan had done earlier in the movie.

Long version:
Young Dan Torrance, now living in Florida and haunted by the ghosts from the Overlook Hotel, is visited by the ghost of Holleran, who teaches him to lock the ghosts up in a box in his mind. We then move forward to Dan Torrance (Ewan MacGregor) as an adult alcoholic, still struggling to leave what happened to him as a child in The Shining behind. He eventually settles in a town where a former addict named Billy (Cliff Curtis) gets him into AA and helps get him a job in an old age home. There, Dan learns that he can help the dying patients ease into death without fear, earning him the nickname Doctor Sleep.

Dan is periodically contacted by Abra Stone (Kyliegh Curran), a young girl with powerful shining abilities who lives nearby, through messages on a chalkboard in his apartment. They never meet in person but maintain communication over the years as Abra develops her gifts.

We first meet Rose the Hat (Rebecca Ferguson) in 1980 as she lures a young girl named Violet into conversation long enough to get her surrounded by Rose’s friends, trapping her. Rose gets the girl to admit that she has special abilities and the scene cuts away as Rose’s eyes begin to glow. We learn that Rose the Hat and her group are essentially like vampires who consume the shining from others in order to survive. They age very slowly and will be healthy as long as they consume steam regularly. But over the years that follow, they begin having a hard time tracking people with the shining and begin to get desperate.

They eventually find a young boy in Iowa (Jacob Tremblay) in the present day who uses his skill with the shining to be good at baseball. As they kill him and consume his steam, Abra hears his cries from all those miles away and sees what is happening. Rose the Hat senses her presence and tells her compatriot, Crow Daddy, about it later, excited that they could feed off of Abra’s power for a long time.

Abra, meanwhile, contacts Dan to tell him about what had happened to the boy. Dan tells her to remain hidden and not mess with these people because they are dangerous. Abra tries to find clues about who these people are and where the boy is so she can help his parents get closure, and accidentally ends up in Rose the Hat’s head. Rose tries to trick Abra but Abra escapes and throws Rose violently backward. Rose tells Crow Daddy that she’s never experienced such power and they need to find this girl.

Rose meditates and locates Abra. She tries to get into Abra’s head but Abra turns the tables on her and gets into the parts of Rose’s mind that she keeps locked away. When Rose reacts angrily, Abra injures her, forcing Rose to retreat. One of the older members of Rose’s group starves to death and they consume his steam, agreeing that they have no choice but to go after Abra in order to survive–but that Rose the Hat must stay behind since Abra knows her and will sense her coming. They are unaware that Abra has used her power to see the other members of the group, including Crow Daddy.

Abra tells Dan about the new confrontation and that she can track Rose the Hat’s group if he gets her the boy’s baseball glove–which had been touched by the members of the group. Dan refuses at first, but agrees to go after he is visited by Holleran’s ghost for what Holleran tells him will be the last time. Dan convinces Billy to go to Iowa with him and when they find the boy’s body, Billy believes everything Dan has told him.

Dan, Billy, and Abra tell Abra’s father about what is going on (her mother is out of town visiting her dying mother). Abra’s father only believes them after Abra uses her gift to show him what she had seen Rose the Hat and her group do to the young boy.

Dan and Billy take Abra to a remote campsite, where Rose the Hat’s group locates Abra after she separates from Dan and Billy. It is then revealed that Abra is not there at all–she is back in her home with her father and has been mentally projecting herself to lure Rose the Hat’s group into this trap that Dan and Billy have set. Dan and Billy manage to kill Rose the Hat’s group, but one of them manages to use her powers of persuasion to get Billy to commit suicide before dying. While Dan is upset over Billy’s death, Abra asks why she has not seen Crow Daddy with the others–which is exactly when she is pulled out of her meditation by Crow Daddy himself–who had come to her house and killed her father. Crow Daddy drugs Abra to tamp down her shining and drives off with her.

Dan finds the body of Abra’s father and meditates, finally managing to locate Abra and speak to Crow Daddy through her. He distracts Crow Daddy and crashes the van, noting that Crow Daddy had allowed his near-immortality to make him think he wouldn’t need a seatbelt. Crow Daddy is thrown through the windshield and killed.

Knowing that her entire group is dead, Rose the Hat angrily tells Dan and Abra that they will pay for this. She consumes all the remaining steam they had saved up, which heals her from the damage Abra had done to her earlier.

Dan and Abra meet up and he takes her to the Overlook Hotel, where he knows they will be able to use the hunger of the hotel’s spirits against Rose. Abra’s mother calls her in a panic, having returned home and found her husband’s dead body. Abra tells her she loves her and tosses her cell phone out the car window so they cannot be tracked.

At the Overlook, Dan tells Abra to wait in the car while he goes to wake up the hotel because he doesn’t want her in there a second longer than she has to be. He goes in and the hotel’s lights begin activating. He turns on the hotel’s boiler, visits the apartment where he and his family had stayed (being visited by old ghosts along the way), and ultimately finds himself in the ballroom, where a drink is waiting for him at the bar. Dan sits and speaks to the bartender who appears (shown only from behind at this point). The bartender identifies himself as Lloyd, but Dan speaks to him about his childhood and the death of his mother, whom he identifies as the bartender’s wife despite the bartender’s objections. He tells the still objecting bartender about how his alcoholism had plagued him his entire life. Angered by Dan’s refusal to play the game, the camera reveals the bartender is, in fact, Dan’s father (a lookalike Jack Nicholson actor, at least). Reaching closure for what happened, Dan leaves the bar after Abra calls to him that Rose the Hat is arriving.

Rose walks into the hotel and meets some of the ghosts, even seeing blood pour from the elevators. She eventually finds Dan and Abra in the room where Dan’s father had been working on his book in the original movie. She then realizes she has been tricked into the hedge maze instead, where Abra uses her powers to sneak up on Rose and wound her repeatedly. When she finally catches Abra, Rose realizes that she had been being tricked the whole time and she was actually in the room where Dan’s father had worked.

Abra runs and Dan faces Rose the Hat, holding an ax and backing up the staircase just as his mother had done when confronted by his father. Rose tries to convince Dan to join her but he refuses. He manages to wound Rose with the ax, but she uses her powers to get the ax from him and wound Dan very badly–nicking his femoral artery. He falls down the stairs and Rose begins drinking in his steam as his life fades away. Just as Dan is dying, Rose finds the locked boxes in his mind and eagerly opens them all, wondering aloud what prizes she would find. Dan tells her they aren’t prizes, they’re just hungry. Rose looks up and sees all the ghosts he has locked up over the years (including the woman from the bathtub in the original movie). The ghosts grab Rose the Hat and kill her. They then turn their attention to Dan.

Abra sees Dan and comes toward him before realizing that his eyes have been whited out and he is trying to kill her. He chases her into room 237, where Abra tells him that she knows he is still in there. She reveals that just in case, Dan had boobytrapped the hotel by priming the boiler to explode when he went into the hotel alone earlier. Dan manages to fight his way back out long enough to tell Abra to run because he can’t be saved. Abra reluctantly agrees and runs to the car. Dan goes to the boiler room to await his fate, where the ghost of his mother appears and comforts him. When the camera pans back, Dan has reverted to being a child in his mother’s arms as the hotel blows up around him.

Abra watches the explosion from outside the hotel as police sirens begin to approach from the road.

Back at home, Abra is speaking to Dan in her bedroom. He gives her guidance similar to how Holleran had guided him earlier. When Abra’s mother knocks on the door to tell her dinner is ready, Dan is gone–revealing that Abra had been speaking to his ghost. Before going downstairs, Abra tells her mother the truth–that she had been speaking to Dan’s ghost. She tells her mother that there are lots of ghosts, and that she knows her father is okay where he is. Abra’s mother accepts Abra’s news and tells her she loves her. She invites Abra down for dinner, but Abra says she needs to do something first. 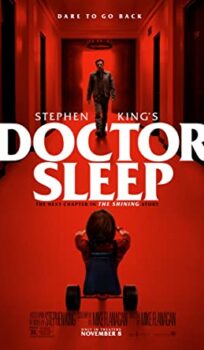