POOPER:
The Eye of Agamotto holds the Infinity Time Stone. The Ancient One is killed, Doctor Strange stops Dormammu and his zealots, Mordo leaves, and Doctor Strange becomes the guardian of the New York sanctum.

LONG VERSION:
Zealots led by Kaecilius kill a librarian and steal pages from an ancient spell book to bring the world into the eternal dark dimension.

Dr. Stephen Strange is a phenomenal and rich neurosurgeon whose hands are damaged in a car accident to the point he can no longer perform surgery. Strange expends all of his financial resources to find a way to restore his hands, alienating his colleague and former paramour Dr. Christine Palmer in the process.

Strange is directed to Kamar-Taj in Kathmandu by Pangborn, a paraplegic who regained the ability to walk. Strange discovers that Pangborn’s ability comes from the use of sorcery learned from tutelage by the Ancient One and her disciples, including Mordo and Wong. While studying, Strange discovers the Eye of Agamotto, an ancient relic that holds the Infinity Time Stone.

The zealots use the stolen pages to begin summoning Dormammu the lord of the dark dimension, which destroys the London Sanctum. Strange learns there are two other sanctums in New York and Hong Kong, which prevent Dormammu from entering the earth realm. Strange encounters the zealots in the New York Sanctum, where they kill the Ancient One and Strange attains the Cloak of Levitation.

In Hong Kong, it is discovered that the zealots have opened the doorway to the dark dimension which begins to suck in the world. Using the time stone, Doctor Strange enters the dark dimension and traps Dormammu in an infinite time loop, where they experience the same moment over and over again. As Dormammu becomes exhausted, Strange proposes that he will break the loop if Dormammu leaves and never seeks earth again. Dormammu agrees. Strange breaks the loop, returns time to before the gateway was opened, and Kaecilius and the zealots are sucked into the dark dimension.

Realizing the Ancient One had been using powers from the dark dimension to gain immortality, Mordo leaves. Strange takes up residence in the New York Sanctum as its guardian.

Mid credits – Strange offers to help Thor and an off screen Loki to find Odin on earth.

Post credits – Mordo confronts Pangborn for using magic to break the laws of nature, and re-cripples him by taking away his power. 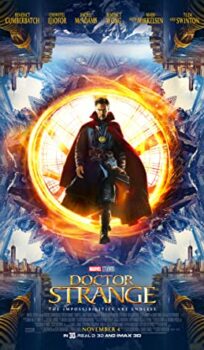