Loosely based on Edgar Allen Poe’s “The Cask of Amontillado”.

Tom Robinson (Wes Bentley) and his wife Elizabeth (Emmanuelle Vaugier) are both schoolteachers who live in the Las Vegas area.  James Dolan (Christian Slater) is a mobster who deals in human trafficking for the sex industry.  One day, Elizabeth is riding her horse in the desert when she witnesses Dolan killing two men for botching a delivery of several women, who were being transported by Dolan, that eventually resulted in their deaths.  She barely escapes Dolan’s henchmen and she and Tom go to the FBI, who put them in witness protection.  Because Elizabeth dropped her cellphone during her escape, Dolan is able to track her location and has her killed by a car bomb.

Tom becomes despondent after Elizabeth’s death and, coupled with the FBI’s incompetence in apprehending Dolan, decides to take matters into his own hands and kill Dolan.  He buys a gun and stakes out Dolan’s residence.  Just as he is about to pull the trigger, a group of rival mobsters show up and attempts to kill Dolan.  Dolan escapes by jumping into his large and bulletproof Cadillac SUV while his henchmen kill the mobsters.  Tom, knowing he can’t kill Dolan by shooting at him while in his car, begins to follow him.  Dolan recognizes Tom when he gets too close and confronts him at a rest stop.  After beating him up, he chooses not to kill Tom because he feels that Tom having to live with himself is a worse fate than death.

Undeterred, Tom hatches another plan.  Dolan frequently travels from Las Vegas to Los Angeles, and the highway connecting the two cities is under construction.  Tom gets a job with the road construction crew and quickly learns all about the construction equipment.  Now knowing how to run the equipment, Tom sets in plan in motion.  Dolan’s next trip to LA is going to be over Labor Day weekend, when the crew is off.  That morning, Tom takes a concrete cutter and earth mover from the construction site and proceeds to dig a hole in the road that is currently closed due to repair.  He digs it wide enough to fit the Cadillac, but narrow enough so that nobody can open the doors once the car falls inside.  After covering the hole with a tarp painted to look like the road, Tom removes the detour signs just as Dolan and his henchmen are driving up.  Tom’s plan works, and Dolan’s Cadillac falls into the hole in the road.  Tom quickly puts the detour signs back up so no one else can fall into the hole.

The crash kills one of the henchmen and severely injures the other one, whom Dolan eventually mercy kills.  Tom slowly begins filling the hole with dirt while the injured Dolan pleads for his life.  Tom continuously taunts Dolan by making him think that he will let him out, but never does.  Just as Tom covers him and his Cadillac with the last piece of highway, the FBI calls and tells him that they finally have enough evidence to arrest Dolan, and will do so once he arrives in LA.  The movie ends with Tom dropping the phone and laughing hysterically as he lays on top of the road. 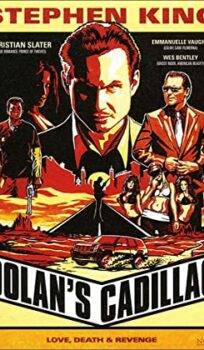