After D’Urville (Wesley Snipes), in a condescending manner, forewarns that the Dolemite film won’t ever be seen by anyone, upon his departure following wrap-up of principal photography, Rudy Ray (Eddie Murphy) finds himself feeling dejected and frustrated as, indeed, no major studio seems to take up on it. He goes back to touring with his Dolemite stand-up routine; however, he finds the light when, while in Indiana, radio DJ Bobby Vale (Chris Rock) tells him he could try for locally promoting the film in “four-wall distribution” format, which means he’d rent a venue for a flat fee and, while the venue itself profits from concessions, Rudy Ray would be able to keep all box-office income. He contacts Demond (Barry Shabaka Henley), the owner of a huge old-style theatre, strikes a deal and goes on to promoting the movie by himself all around town.

The gimmick works; much to the delight of Rudy Ray and his crew, a massive crowd gathers to see the film with good results and positive word-of-mouth. This catches the attention of Lawrence Woolner (Bob Odenkirk), the owner of Dimension Pictures -who, interestingly enough, had turned them down previously-; Rudy Ray and the crew meet with the studio executives and, after some initial friction and doubts, Woolner convinces them to give the studio a chance to promote the film professionally and at a wider scale, which would mean massive revenue for everyone involved.

Everyone gets pumped up about the Hollywood premiere; Lady Reed (Da’Vine Joy Randolph) even shares a tender moment with Rudy Ray, dearly thanking him for giving her and everyone else the chance they would’ve never had otherwise, to which he answers humbly and proudly. However, en route to the event, they all get wing of critics publicly panning the film on written media; although this upsets them, their spirits get lifted again when not only do they catch the sight of an even larger crowd waiting to attend the film, but they’re also told there would have to be an extra screening past midnight, so no one would miss it. On their way into the theatre, two young boys catch the attention of Rudy Ray as proud fans of Dolemite; he encourages Lady and everyone else to go ahead, while he stays outside and has a lively, animated interaction with those two youths (rhyming at each other, Dolemite-style), as well as the rest of the cheering attendees.

Title cards at the end inform the film went on to be one of the top box-office performers of its year and it begat several other sequels, in result. Also, Rudy Ray went on to be touted as “The Godfather Of Rap” and he continued performing professionally as Dolemite until his death in 2008. While the credits roll, we see footage from the real Dolemite movie. 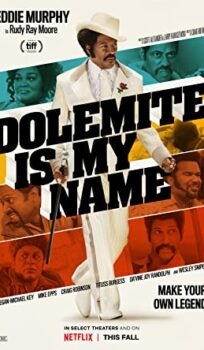