Dolittle (Robert Downey, Jr.) is grieving over the death of his wife. He is not treating any animals at his sanctuary. Polynesia (Emma Thompson) convinces him to respond to Queen Victoria’s (Jessie Buckley) request for help. Queen Victoria has been poisoned and Dolittle has to harvest fruit from a magical tree for a cure.

Dolittle treats the dragon (Frances de la Tour) guarding the tree by extracting indigestible remains such as swords, shields, armor and finally a set of bagpipes from her rectum. Dolittle gets a piece of the fruit and returns to England just in time to place a drop of juice in the Queen’s mouth to cure her.

Dolittle leaves a walking stick insect on a painting in the Queen’s room. It informs Dolittle that Lord Badgely (Jim Broadbent) poisoned her. The Queen has him arrested.

Dolittle reopens his sanctuary with Stubbins (Harry Collett) as his assistant. The mid-credits scene shows Mudfly (Michael Sheen) being attacked by bats as he tries to talk with them. 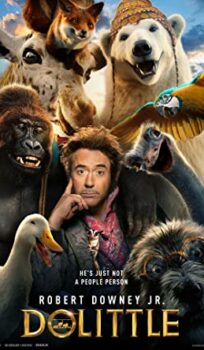