After the hurricane, the animal hospital is in such dire shape that Gloria (Frances Sternhagen) and the rest of the baord decide the only solution is to sell their property to a hotel magnate named Orton. New homes are found for all the animals, but not for the crippled Winter, who will have to be put down.

Sawyer (Nathan Gamble) persuades Dr. Clay Haskett (Harry Connick Jr.) to appeal to the public for funds via the media and the Internet. Winter the dolphi becomes a popular cause. Haskett raises enough money to pay for Dr. McCarthey (Morgan Freeman) to build a functioning prosthetic tail. Once again, the dolphin rejects the tail… but Sawyer figures out that the dolphin’s problem is not with the tail but with the bandaging under the tail. Dr. McCarthy replaces the bandaging with a gel that proves more comfortable. The dolphin gets used to the new artificial tail and learnes to swim correctly again.

Winter becomes very popular and draws huge crowd. Orton comes with his own family to see Winter perform, and tells Dr. Haskett that he can keep the hospital open. Orton will fund his work. 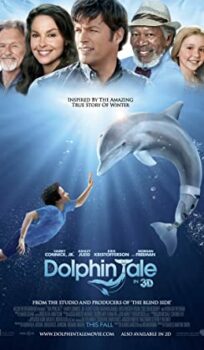