The action takes place on a remote island in the south Pacific.

Donovan (John Wayne) is fooling around with his friend’s children, when commotion in the harbor alerts him to the return to the island of Gillhooley (Lee Marvin).  Gillhooley and Donovan share the same birthday, and every year on their birthday they have a big fight.  Neither can remember how it started, but Gillhooley returns to carry on the tradition.  He and Donovan have it out, punching, throwing bottles, falling in fountains etc..  Since Donovan is played by John Wayne, you can guess that he is the man standing at the end.  After this Donovan and Gillhooley are the best of friends for the rest of the movie.

The island doctor (Jack Warden) leaves for a few weeks to make boat rounds of the outer islands. Word comes that the doctor’s mother died, and he has inherited a controlling interest in her shipping company.  The other relatives back home in Boston are not pleased.

The doctor has a daughter who has never seen him (he left to the South Pacific before she was born).  The will states that if the heir is not of good moral character he loses the inheritance.  The daughter heads to the island to prove that the doctor is not of good morals, so she will inherit the company.  Donovan and Gillhooley worry that if the daughter meets the doctor’s children, with a native woman, that will be evidence against him.  The kids are packed off to Donovan’s to pretend to be his children.

Every movie cliche occurs when Donovan and the daughter meet.  He tries to help her off the boat, and they both fall in the water etc…

In the end, the daughter sees the work the doctor does taking care of all the people on the islands, and comes to respect him for it.  She falls in love with Donovan. 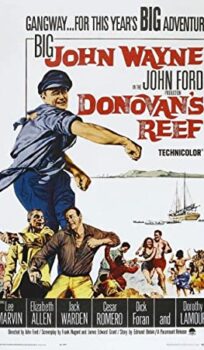