Everything takes place in the upscale McIntyre Hotel in New York City.  Airline pilot Jed (Richard Widmark) is dumped by his girlfriend Lyn (Anne Bancroft, in her first movie role), because she thinks he is inconsiderate and unfeeling.  Nell (Marilyn Monroe) is recruited by her uncle, a bellman at the hotel, to babysit in the hotel room for a couple attending a banquet at the hotel.  It is clear from the conversation between Nell and her uncle, that things are not right with Nell.  When the uncle checks in on her, he is upset to discover that she is wearing the jewelry and nightgown of the lady she is babysitting for.

Jed and Nell flirt, and he comes to her room.  Nell pretends to be a wealthy traveller.  The girl Nell is watching wakes up and reveals that Nell is just the sitter.  Nell’s mind is moving in and out of reality, as at times she thinks Jed is Phillip, and old boyfriend who died in a plane crash.  Nell thinks the girl is going to make her lose Phillip again.  Just then the uncle returns to check on Nell.  Nell smashes an ashtray on her uncle’s head.   While Jed is attending to the uncle, Nell ties the girl, bound and gagged, on the bed.  The busybody old lady in the next room calls hotel security.  Nell escapes from the room.

Nell is in a corner of the lobby, surrounded by a crowd of gawkers, about to cut herself with a razor.  Jed approaches her and gently “talks her down” and gets the razor.  Impressed by how considerate and caring Jed was, Lyn reunites with Jed. 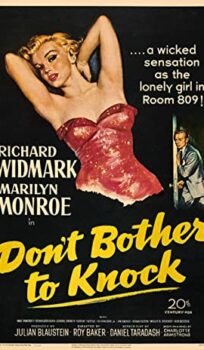