Astronomers Randall Mindy (Leonardo DiCaprio) and Kate Dibiasky (Jennifer Lawrence) find evidence that an enormous comet is heading toward Earth within six months time and will wipe out all life on Earth. However, despite their attempts to warn President Janie Orlean (Meryl Streep) and the rest of the public, they treat it as a hoax or a wild conspiracy theory.

Randall and Kate are joined by Dr. Teddy Oglethorpe in their efforts to spread the word of the comet’s impact, met with indifference or mockery. Soon, Janie attempts to capitalize on the comet to divert attention from a scandal she is involved in. They initially attempt to send war hero Benedict Drask out into orbit to nuke the comet, but once big tech CEO Peter Isherwell finds out that the comet has enough material in it to mine for profit, the administration changes their tune and plans to allow the comet to hit in order to profit off of it. Randall becomes swept up in the media frenzy, while Kate is shunned for seeming like a conspiracy nut.

Eventually, once the comet starts coming into Earth’s atmosphere, the public pays more attention to it, but more for the purposes of money or fame. Despite Randall and Kate’s best efforts to combat the comet and save the population, Janie and Peter’s teams outnumber them and still attempt to mine the comet, only to be met with failure as well. Randall, Kate, and their loved ones gather to spend their final moments together, while Janie and all the other rich people (except her son Jason) go into cryosleep to survive the comet’s impact. Earth and all life on it is eventually destroyed.

More than 22,000 years later, the survivors arrive at a new planet, with several mutant creatures inhabiting it, and Janie is eaten by one of them. 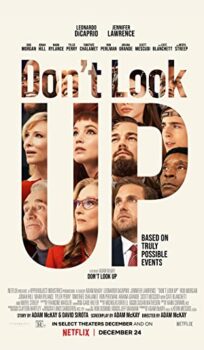