Victory Town is a seemingly idyllic 1950s community where the husbands go to work while the wives stay home and tend to their needs. Young couple Alice and Jack appear in love until Alice begins to notice several strange occurrences. One other woman, Margaret (Kiki Layne), had begun to see through the cracks in Victory, but she kills herself because nobody believes her.

The Victory Project was started by Frank (Chris Pine) and is actually a virtual reality simulation where the men who sign up trap their wives in this reality to keep them from fulfilling their wants and needs. Jack (Harry Styles) keeps Alice (Florence Pugh) in there because he felt their real married life, where she was an overworked nurse, wasn’t making them happy. Alice finds that Victory Headquarters has a mirror that would allow her to wake up back in the real world, but Frank’s henchmen prevent her from escaping.

After Alice kills Jack, she escapes using a neighbor’s car and races to HQ while being chased by the henchmen. Frank’s wife Shelley (Gemma Chan) kills him for failing to stop Alice from finding out the truth and indicates she will now take over Victory. Alice makes it to the mountain and finds the mirror, allowing her to escape and wake up in the real world. 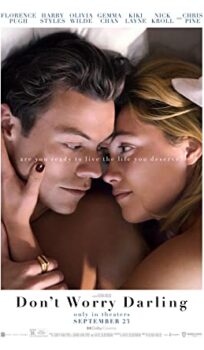