After losing containment on Mars and following the escaped “Baron” creature back to the Ark complex on Earth, Sarge (Dwayne Johnson) decides that containment can only be maintained by killing everyone alive in the complex, even though Samantha Grimm (Reaper’s sister) discovered that not everyone who gets bitten will become infected. Apparently the C24 serum only turns you into a monster if you have a genetic capacity for evil – otherwise it turns you into a superhuman like the ancient race on Mars.

When The Kid refuses to execute uninfected women and children, Sarge kills him for disobeying an order while on a mission. Reaper (Karl Urban) and Sarge are about to go at it when the “Baron” shows up and kills Pinky, then retreats further into the complex. While pursuing it, the group is overrun by half-turned “zombies” who kill Duke and drag Sarge through the partially closed nano-door. Reaper is wounded during the fight and Samantha drags him into a room which she barricades, then injects him with C24 convinced it’s the only way to save him since he’s a good person regardless of his belief otherwise.

Hours later, Reaper wakes up to find himself fully healed and Samantha gone. He searches the complex and finds that a now-infected Sarge has slaughtered the “Baron” along with everyone else and is about to do the same to her. Reaper then challenges the increasingly demonic Sarge to a fight, during which Sarge begins changing into a more demonic form with enhanced strength (he even wraps a metal rod around his fist and forearm in a nod to the Cyberdemon of the games). Reaper ultimately defeats him by hurling him through the Ark event followed by a grenade, after which a fully healed Reaper carries his sister up to the surface. 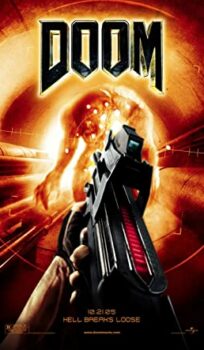